Cells can be engineered to produce high levels of valuable chemicals

A study made by scientists from the Novo Nordisk Foundation Center for Biosustainability at the Technical University of Denmark, published by PNAS, suggests that cells can be engineered to overcome evolutionary pressure and produce high levels of valuable chemicals.

Bioproduction of chemicals using engineered microorganisms is routinely demonstrated today, but only few bioprocesses are functional in the large fermentation volumes that industry requires. For a longer period, the lack of successful scale-up has been one of the most important challenges for engineers to solve, in order to replace oil-derived production with biobased production of chemicals.

“One central issue is that bioproduction in large-scale fermenters is limited by toxicities and stresses that allow evolution to reduce or eliminate production of chemicals by engineered cells.  This makes it expensive and challenging to commercialize biobased production systems in particular in when large amounts of chemicals are needed,” says Morten Sommer, Professor and Scientific Director of the Bacterial Synthetic Biology section at the Novo Nordisk Foundation Center for Biosustainability, Technical University of Denmark.

The evolution can be circumvented

The key to their finding is to rewire production cells to only grow when they contain high product concentration. Thus, the evolution can be circumvented and cells will be able to produce the biochemicals within an industrial time scale.

“When we rewire the production microorganism to slow down growth in case it loses production, we efficiently prevent it from performing evolution on the genes leading to production. This allows us to maintain productive cells even when the cells divide to fill up large fermentation tanks,” says Peter Rugbjerg, Postdoc at the Novo Nordisk Foundation Center for Biosustainability.

This concept is demonstrated by the scientists and can help in driving the development towards a more sustainable society.  At this point, microorganisms do not naturally produce high amounts of valuable chemicals, which demands the use of many R&D resources. An expansive process that delay the launch of new biobased processes.

“Engineered, high-level production of sustainable chemicals is not attractive for the cell that tends to grow slower and explore ways to evolve and stop production. This makes it difficult to bridge the gap between research conducted in lab shake flasks and industrial need for large cubic-meter quantities,” emphasizes Peter Rugbjerg. 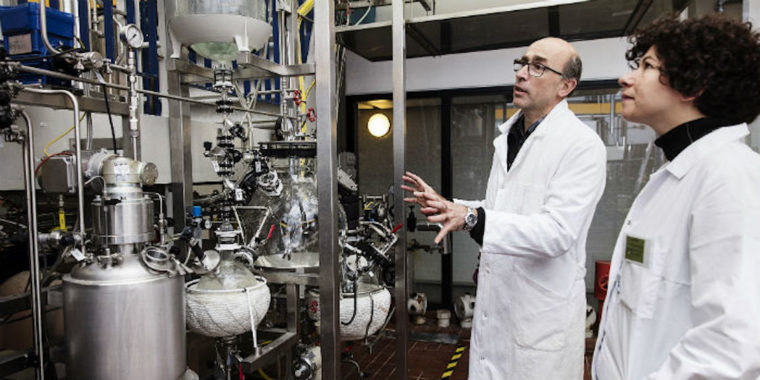 If the findings from the study are broadened out to more production cases, a major obstacle for investing in biobased production is removed.  The group at the Novo Nordisk Foundation Center for Biosustainability currently collaborates with biotech companies to investigate and solve the impact of the evolution in current fermentation tanks.

“The biotech industry clearly indicate that they see a great potential in solving this problem. This study can be a step towards more efficient and affordable large-scale biomanufacturing to the benefit of society”, says Morten Sommer.

Uppsala University researchers have been able to uncover the origins of today’s Native Americans with the help of DNA from a 12,600 year-old burial site in Montana. According to the international study, published in Nature, current Native Americans are directly linked to the so-called Clovis people and through them, also…

A weak electric “noise” can adjust the balance and motor skills of patients with Parkinson’s disease, according to a study performed at Sahlgrenska Academy. Researchers working with NASA have developed a prototype of a portable electrical stimulation device that will be used in long-term studies of Parkinson’s patients in their homes. In a study involving 10 Swedish Parkinson’s…

An international collaboration project to develop and implement novel genome-based disease prediction tools has received over 10 million euros from the EU Horizon 2020 Research and Innovation program. The project aims to demonstrate the potential and benefits of powerful artificial intelligence (AI) technologies on the generation of genetic predictive scores…