With the seventy-five meter-tall Mærsk Tower, the University of Copenhagen has taken an architectural leap towards becoming a spearhead in health and medical sciences.

The research tower, designed by C. F. Møller and built with funding from the A.P. Møller Foundation, is directly connected to the existing Panum Complex. The primary aim has been to create a boundaryless, flexible and stimulating research fellowship across institutes, departments and external partners. One key feature in the approach was breaking with traditions, explains Mads Mandrup Hansen, Partner at C.F. Møller and lead architect on the project.

With an open interconnection of the different floors, the Mærsk Tower breaks with traditional laboratory layouts typically limited to horizontal plan designs. The overall layout of the Mærsk Tower is based around the concept of research departments capable of expanding vertically as well as horizontally but without compromising connectivity. To achieve this openness, connectivity both physically and visually plays a significant role.

In developing the scheme, C.F. Møller worked closely with The Panum Institute’s researchers to create a design that reflected the university’s collaborative approach: to create a future research environment based upon openness, where open laboratories and transparent glass walls seek to enable new ways of working across disciplines. 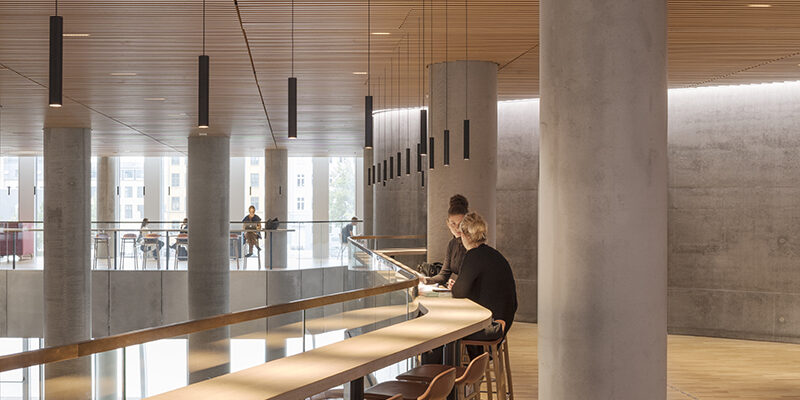 The Maersk Tower is designed as a venue which encourages many opportunities for coming together, transcending different disciplines, from the general public to the research community.

“The architecture and especially the looping layout of the research floors, and the openness between floor levels and connectivity by an internal stairway, are key points of exchange and collaboration internally, supporting accessibility from three different sides in a three dimensional setup, working side-by-side and creating the possibilities for a much more flexible way of expansion, contraction and knowledge sharing under one roof than in a conventional setup, where there is no connectivity between floors and knowledge sharing is trapped in a conventional layout with closed corridors,” says Mandrup Hansen.

The goal of the new research facility has also been to build a connection towards the surrounding society and to open the university up towards the city and society at large.

“Basically, it’s a research building organized around the idea of communicating its research results to both the international medical society and the general public. Bridging the often closed off campus with the city in a much more open and direct fashion,” explains Mandrup Hansen. 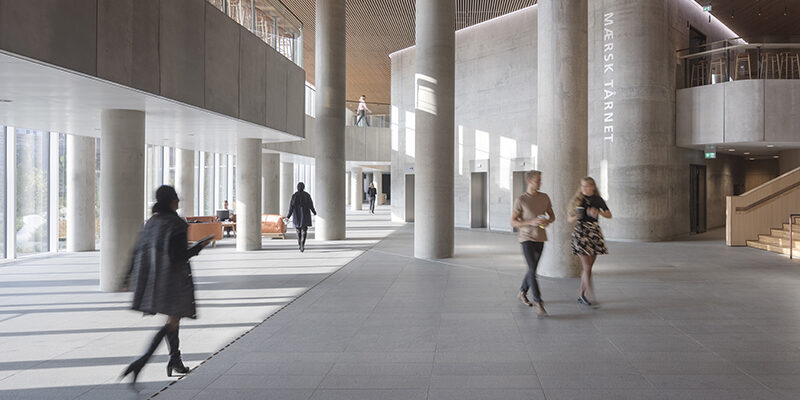 A publicly accessible base of the building and a vertical, internal courtyard, with an open oak-clad stairway and strategically placed coffee hotspots that connect all floors is designed to ‘put science on full display’ and to emphasize knowledge sharing in a straightforward and informal way.

A parallel objective has been to create a building that will stand out as an identity-creating, sculptural hub for the Panum complex and the university’s Nørre Campus.

“The Mærsk Tower is a first in terms of attempting a densified lab facility in a high rise in Denmark, or for that sake in Scandinavia. At the same time, the external aim of the architecture has been to create a sustainable landmark, promoting ‘visible science’ across campus towards the public in a direct dialogue with the city and university in a new and transparent way.”

“The Mærsk Tower is a first in terms of attempting a densified lab facility in a high rise in Denmark, or for that sake in Scandinavia. At the same time, the external aim of the architecture has been to create a sustainable landmark, promoting ‘visible science’ across campus towards the public in a direct dialogue with the city and university in a new and transparent way,” says Mandrup Hansen.

To ensure the stable conditions for research in public health science in the 15 storey building, the concrete parts of the building were cast in situ. This ensures compliance with the major anti-vibration requirement, as the building does not sway so easily as other high-rise buildings.

“It provides a much more stable and steel enforced structure, than a conventional build-up of steel and concrete components would have achieved. A choice that proved to be right, since it supports the use of sensitive lab equipment on all floors all the way to the top.” 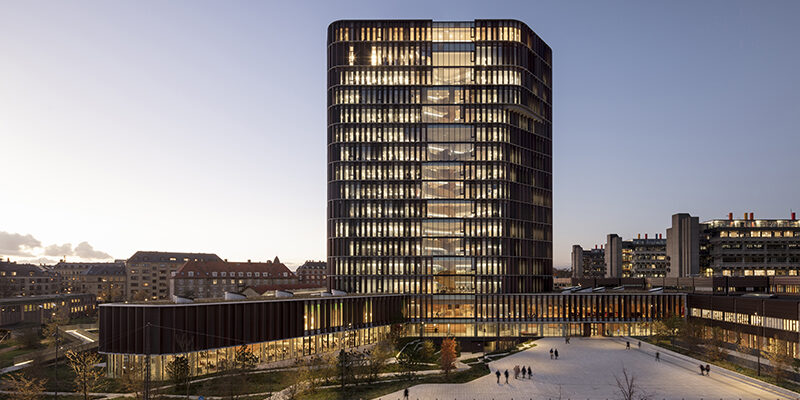 The tower rests on a low star-shaped base that reaches out into the landscape towards the city. With its transparent façade, the entire base appears open and welcoming.

The Mærsk Tower is also specifically designed to minimize the usual negative impact of high-rise buildings in a tight urban setting, such as wind gusts and large areas of shade. A challenge that was overcome strategically by pushing the tower back on the site, combined with lower buildings at its base and through an organic shaping of the tower. There are also a vast number of energy efficient features that have been integrated into the design process, to enable an energy consumption of around 50 percent compared to regular research facilities.

“On top of that we can store and reuse rainwater, thereby protecting the site from flooding during heavy rainfalls and cutting down water usage for watering and toilets. The building is also equipped with a total of 1500 m2 of solar panels.”

“Because of all the technology, research facilities are usually some of the most energy consuming buildings you have. But we’ve created an extensive monitoring system which turns off any unused research equipment and other unused energy outlets. On top of that we can store and reuse rainwater, thereby protecting the site from flooding during heavy rainfalls and cutting down water usage for watering and toilets. The building is also equipped with a total of 1500 m2 of solar panels,” says Mandrup Hansen.

The tower’s relief façade is a movable copper clad brise-soleil. The copper elements reduce wind turbulence around the tower but primarily function as sunshades. They protect the sensitive research environment from overheating. The adaptable façade closes and opens in accordance with the movement of the sun around the tower over the course of the day. Furthermore, all windows are fitted internally with a two-layer fabric screen to provide further shading and glare protection. One of the two layers allows about 50 percent of daylight to penetrate, while with the other the space can be completely darkened. 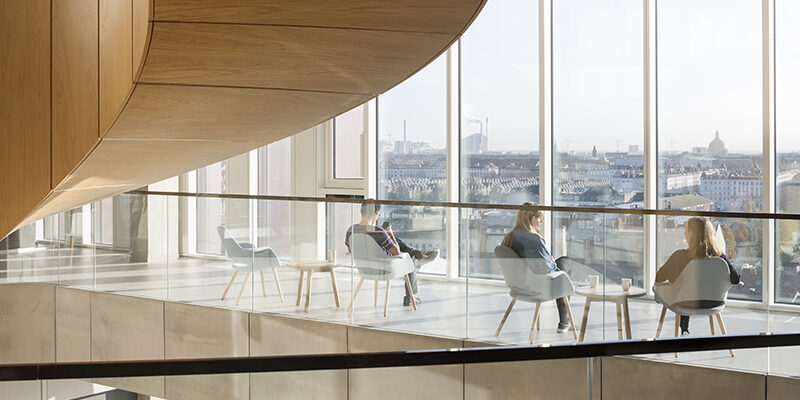 Finding the balance of form and function crucial to a research environment, as well as creating a highly energy efficient building, has involved a series of challenges from a design perspective, concludes Mandrup Hansen.

“A key has been never to compromise the overall architectural idea and functionality of the building, but always integrated with the aim of supporting the best thinkable work environment for its researchers.”

Elicera Therapeutics have announced the publication of a scientific article describing the mechanism-of-action of the company’s universal CAR T-cell enhancement technology platform iTANK in Nature Biomedical Engineering. Proof-of-concept data presented in the publication also indicate that the iTANK-platform is universally compatible with other CAR T-cell therapies, states the company in…

A new study from Karolinska Institutet shows that new heart muscle cells in mice are mainly formed directly after birth. After the neonatal period the number of heart muscle cells does not change, and heart growth occurs only by cell size increase, similar to the human heart. Cardiovascular disease is…

A consultant and his colleague at the laboratory department at the University of Southern Denmark discovered bacteria they had never seen before in a sample taken from a patient with blood poisoning.  “We ran a number of comprehensive DNA analyses in an attempt to find out what we had found,”…