For the first time, scientists have succeeded in producing brain scans that detect the presence of alpha-Synuclein.

“We investigated individuals that were healthy controls, patients with Parkinson’s disease, dementia with Lewy bodies and MSA, and we found a selective binding of this new PET tracer in the cerebellum of all patients with MSA, which was not seen in any of the other study participants,” says Oskar Hansson.

The researchers also found that it is enough to do a 30 minute scan, and longer scans are not needed, which will facilitate clinical implementation, believes Hansson.

The current preliminary findings indicate that new PET imaging method can be used to distinguish patients with MSA from patients with other diseases and similar symptoms. “In the future, this might substantially improve the diagnostic work-up in the clinic for patients with MSA-like symptoms,” says Hansson.

“Our next steps include investigations of patients with other neurodegenerative diseases, including Alzheimer’s disease to study how specific the new PET tracer is for MSA.” 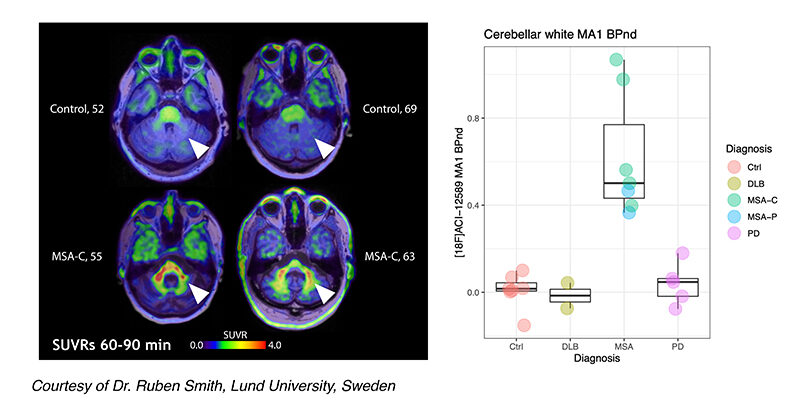 α-Syn is involved in several pathogenic processes in neurodegenerative diseases and it is an important biomarker for these diseases. However, there have been no diagnostic imaging techniques to detect the presence of α-Syn until now. Therefor the results in the MSA patients are also an important milestone in developing precision medicine diagnostic and therapeutic options for several neurodegenerative diseases.

“Besides improving the clinical diagnostic work-up, imaging tracers that can quantify the concentrations of key brain pathologies, like α-Syn aggregates, will be very important for drug development.”

“Besides improving the clinical diagnostic work-up, imaging tracers that can quantify the concentrations of key brain pathologies, like α-Syn aggregates, will be very important for drug development. Such PET tracers can be used to determine whether a new drug candidate directed against e.g. α-Syn pathology actually can decrease that brain pathology in the brain of humans. This will make drug development much more efficient, and can ensure that only new drugs affecting this target in the human brain are investigated in large-scale and costly clinical trials,” explains Hansson.

MSA is a rare, degenerative neurological disorder affecting the body’s involuntary functions, including blood pressure, breathing, bladder function and motor control. MSA causes deterioration and shrinkage of portions of the brain that regulate internal body functions, digestion and motor control. MSA is difficult to diagnose and is often confused with Parkinson’s disease.