Gregg Semenza: A passion for discovery

Since nothing is more basic to life than oxygen, Dr. Gregg Semenza, MD, PhD, found it logical to want to unravel some of the complexities of how cells monitor and regulate oxygen levels.

Gregg Semenza’s research, which earned one of the three 2019 Nobel Prizes in Medicine or Physiology, opened up understanding of the mechanisms in cells that regulate oxygen flow – and the discovery that the mechanism is functional in many different cell types. In addition, Semenza’s work helped clarify how oxygen levels relate to bodily functions.

One of the basic mechanisms

A professor of genetic medicine, pediatrics, radiation oncology, biological chemistry, medicine and oncology at Johns Hopkins University School of Medicine in Maryland in the U.S., Semenza began his studies about 30 years ago during his post-doctoral work at Johns Hopkins.

According to Semenza, “Oxygen is constantly required by every cell in the body and there is a fundamental response to ensure cells get enough oxygen. This could have considerable applications for different disease states, such as heart disease and cancer.”

“This work and Gregg’s contributions are so deserving. The HIF-1/VHL story is one of the basic mechanisms of physiology that allow life. Over the passing years since its discovery, the importance of HIF-1 has been increasingly clear.”

Semenza set out to learn how oxygen regulates the control of red blood cell production. When oxygen levels in cells decrease, a condition called hypoxia, the levels of the hormone erythropoietin (EPO) increase, which leads to a greater production of red blood cells, a process called erythropoiesis. As part of his work, Semenza studied the EPO gene and how varying oxygen levels regulate it. “By using gene-modified mice, specific DNA segments located next to the EPO gene were shown to mediate the response to hypoxia,” states the Nobel Prize Committee. Both Semenza and Ratcliffe discovered the oxygen-sensing mechanism in almost all tissues, not only in kidney cells, which normally produce EPO, the Nobel Prize Committee noted.

Semenza’s goal was to identify the cellular components regulating this response. In cultured liver cells he discovered a protein complex that binds to the identified DNA segment in an oxygen-dependent manner,  and named it the hypoxia-inducible factor (HIF). The next step was purifying the HIF complex. Semenza was able to publish some of his most important findings by 1995, including identification of the genes encoding HIF. Two different DNA-binding proteins were found in HIF, which were found to be transcription factors, now named HIF-1α and HIF-1β. Researchers now know that the presence of oxygen leads to the destruction of HIF-1alpha so that the factor is only active when cells lack oxygen.

“This work and Gregg’s contributions are so deserving,” says Dr. Charles Wiener, President, Johns Hopkins Medicine International and a professor of medicine at Johns Hopkins. “The HIF-1/VHL story is one of the basic mechanisms of physiology that allow life. Over the passing years since its discovery, the importance of HIF-1 has been increasingly clear.”

Treatment of anemia and cancer

Wiener worked with Semenza in his lab during a sabbatical in 1995 and discovered other HIF-1 functions.

“I was interested in hypoxia and glucose metabolism in the lung, and wanted to explore the role of HIF-1,” Wiener says. “I became even more excited about Gregg’s work as it became apparent that HIF-1 did far more than mediate EPO production. It also is integral to glucose metabolism, including glycolysis and other metabolic pathways.”

One of the first applications for this research is the treatment of anemia, according to Semenza. “EPO controls red blood cell production, and it has been possible for pharmaceutical companies to develop drugs that increase EPO production in patients with kidney failure. One of these drugs, which is currently in clinical trials in the U.S. and in Europe, has been approved in China and Japan. We anticipate approval in the U.S. during 2020 or 2021.”

Semenza also is pursuing a drug that inhibits HIF-1 and its applications for cancer treatment. “We have identified several compounds that inhibit the ability of HIF-1 to turn on the expression of genes and we have shown that these compounds are active as inhibitors of tumor growth in mouse models, and I want to continue to study them,” he says.

In one small trial of a HIF-2 inhibitor developed by a startup company called Peloton, several patients responded well and larger trials are taking place now.  “Hopefully adding HIF inhibitors will contribute to slowing cancer. Inhibitors will have broad applications in cancer treatment.”

Persistence is at the heart of research, Semenza has learned. “We do many experiments that don’t work,” he notes. “My mentor said ‘We search and research.’ The enjoyable aspect of the job is the type of problem-solving that we do to better understand a particular disease. Each study that we do, we hope is a small step forward; each time we write up our results for publication, we can see how far we have come, and that is so satisfying.”

His Nobel Prize winning discoveries might not have come to light if Semenza had pursued his other great interest; he trained as a pediatrician and a medical geneticist, and both areas appealed to him. “But I felt ultimately I could have the greatest impact with work in the lab.” 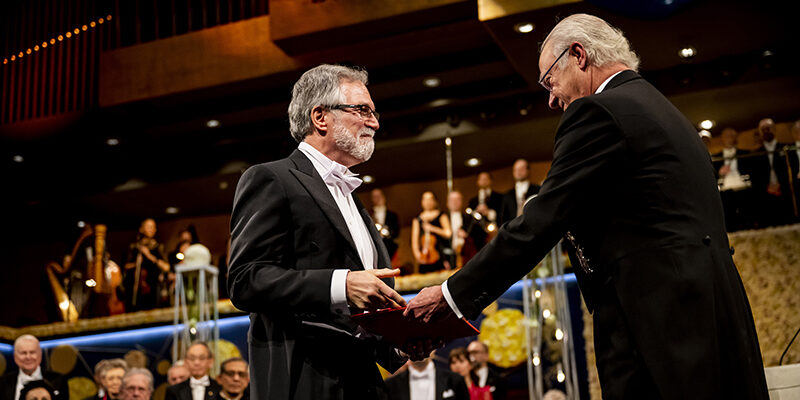 His record has proven his intuition was correct. “As an investigator, Gregg is remarkably smart, creative, rigorous, dedicated, collegial and ethical,” Wiener says. “At his Nobel lecture he listed his mentors, trainees and collaborators – the list could not fit on one slide! He is truly driven by a passion for discovery and to help people through basic investigation.”

“In science, we take small steps – the community of science moves things forward – the ultimate hope is to take what we learned in the lab and apply it to clinical care.”

A high-school biology teacher with a unique approach in Tarrytown, N.Y., helped steer Semenza toward the sciences. “Rose Nelson had a PhD and had done research and rather than tell us a series of facts, she talked about key scientific discoveries and the people who made those discoveries. I became hooked on that.”

Semenza also knows first-hand that it can take years for the impact of basic science discoveries to become apparent to the broad scientific community, but that does not take away from the excitement of the discovery.

“It turns out the system we identified regulates thousands of genes; all this took time to become apparent,” he notes. “In science, we take small steps – the community of science moves things forward – the ultimate hope is to take what we learned in the lab and apply it to clinical care. If we are not successful, someone else will come along and pick up where we left off.”

Professor Jan Holmgren at the University of Gothenburg is one of this year’s recipients of Prince Mahidol’s Award in Public Health. Prince Mahidol’s Award in Public Health is being awarded to Jan Holmgren and John Clemens for their ground-breaking research on “the development, evaluation and introduction of effective vaccines for…

An academic and an entrepreneur, Dr. Sara Mangsbo, PhD, has found a way to integrate her skills and interests so that they complement and augment her passions. The Chief Development Officer at Ultimovacs, an Oslo based cancer vaccine company with an office in Uppsala, Mangsbo is also an Associate Senior…