Hairs essential for the brain’s development

These hairs, or cilia as they are called, have been poorly understood but if they are not functioning a person can develop neurological conditions like hydrocephalus and scoliosis. In an article in Current Biology researchers at NTNU have now provided more insight into how these cilia work and why they are so important.

The scientists studied zebrafish larvae and found that groups of cells with cilia are organized in different zones of the ventricles (the fluid cavities in the brain), which together create a stable, directional flow of the cerebrospinal fluid.

“We found surprisingly little exchange of fluid between the ventricles as long as the fish were at rest, even though the heartbeat pulsations caused some flow between them,” says Emilie Willoch Olstad, first author of the article. “But when the animal moves, locomotion leads to a great degree of fluid exchange between the different ventricles.” 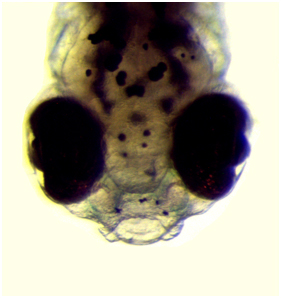 To assess the function of motile cilia the researchers used mutant lines in which genes essential to either ciliary motility or cilia assembly are knocked out. In their study they found that in larval zebrafish mutants lacking cilia altogether, parts of the ventricular system were larger than in control siblings. However, in mutants where the cilia still assembled, but were immotile, the duct between two of the cavities appeared occluded.

“In addition to genes supporting the assembly and motility of cilia, additional factors are suggested to impact other features of the cilia, such as their beating frequency. For instance, both neuropeptides and neural states are proposed to impact the ciliary beating (Conductier et al., 2013, Faubel et al., 2016). Yet, such influences on the cilia and on the fluid remain poorly understood, and we are excited to further investigate this,” says Olstad.

To Olstad’s knowledge no one has reported any specific numbers of motile cilia within the human brain. “However, they are suggested to cover a large surface area of the ventricles (Coletti et al., 2018). It is important that you have a sufficient number of motile cilia, as these contribute to the movement of cerebrospinal fluid along the ventricular walls. Several studies in both rodents, amphibians and fish suggest that the lack of functioning motile cilia along the ventricles causes hydrocephalus (enlarged ventricular cavities) and/or occlusion of the ducts connecting the ventricles. Although less frequent, humans with dysfunctional motile cilia (e.g. patients with primary ciliary dyskinesia) do also sometimes develop hydrocephalus.” 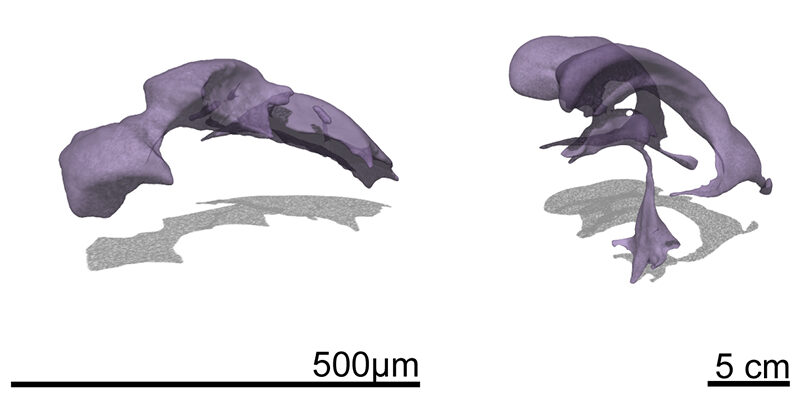 An illustration of the brain ventricle of a 2 days old zebrafish (left) and an adult human (right). Illustration: Olstad et al, Current Biology, 2019, and Vartan Kurtcuoglu/Interfacegroup.ch and Christa Ringers/yaksilab.com

Now the scientists led by Dr Jurisch-Yaksi (Department of Clinical and Molecular Medicine) are interested in further studying fluid circulation in the brain using better analytical tools and computer models. For example, new nerve cells are born near the wall of the ventricles and from here they might migrate to different areas of the brain.

The differentiation of these new cells was suggested to be influenced by nutrients and molecular signals that are distributed by the flow of the cerebrospinal fluid near the ventricular walls (Sawamoto et al., 2006). The next step is now to see if it is possible to influence the brain functioning of the zebrafish by manipulating the cilia and vice versa. 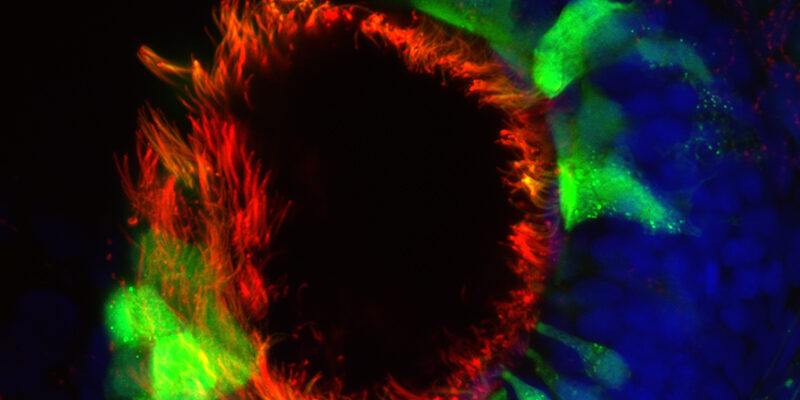 Cilia in the nose of a zebrafish. Cilia are present in many other organs of the body of vertebrates. Here is shown the nose, cilia are in red, some cells are indicated in green and the nuclei are in blue (Reiten et al., Current Biology, 2016). Yaksilab.com