Not only in the Nordic countries, but also in the rest of Europe, pharmaceutical companies are choosing to locate their R&D activities in emerging markets. What are the drug company strategies and what effect will the ongoing outsourcing trend have on the industry?

China India, Russia, and South American countries such as Brazil, are highly emerging pharmaceutical markets for several reasons. The local authorities are very keen on attracting research to their countries, since many of them, particularly China and India, have an increasing middle class with the possibility of buying medical products.

“These are huge emerging markets that invest a lot in research. The universities are expanding, the number of students in China is increasing enormously and the government is making immense investments in research overall,” says Aina Törnblom, Director R&D at LIF, The Swedish Association of the Pharmaceutical Industry.

“The integrated pharmaceutical companies choose to increase their competitiveness by localizing their R&D activities, according to their own infrastructure, in countries where they previously haven’t had their own R&D. These decisions are driven by various purposes, such as a local presence in markets with a future potential, and access to skilled researchers,” says Nils Bohlin, Partner and global practice leader  at Arthur D Little.

Changing the trend in Sweden

Another aspect is the possibility for companies to reach out to large patient groups, which is an important part in conducting clinical trials. For India and China, this increases the accessibility of new treatments to their population. The combination of this promoting environment, lower costs for clinical studies and large patient groups is appealing to many pharmaceutical companies.

“There are many parts of this that have positive effects, for instance giving the populations in India and China access to treatments. The downside on the other hand is that the R&D activities are decreasing in Europe. Since 2004, the number of clinical trials has drastically declined, which is of course concerning. This also leads to consequences for Sweden, and Swedish patients are forced to wait longer for treatments,” says Aina Törnblom.

“However, there is an awareness of this dilemma and we can see initiatives to maintain clinical trials in Sweden. The real challenge here is to integrate clinical trials and research into being a part of daily health care. This is in the interests of patients and good for the development of innovative health care in Sweden. Some CROs are also going into partnerships with larger Swedish regions, such as Region Västra Götaland and the Skåne Regional Council. So there is a will to keep clinical trials here in Sweden from many parts of the industry. Whether this is enough only time will tell, but we need to act now, together with Swedish health care.”

AZ selects Mölndal as one of its three strategic research centers

In times of outsourcing to developing countries, pharma giant AstraZeneca has chosen to go local by making the Mölndal facility in Western Sweden one of its three global R&D sites. At the same time, a large part of the R&D activities are being cut  as the company downsizes its personnel. As part of a major restructuring program, AstraZeneca announced last year that it would be cutting 2,200 jobs from its research and development (R&D) workforce. In March, it was announced that another 2,300 jobs would be cut worldwide from the sales and administration department. Between 2013 and 2016, approximately 5,000 positions will go, of which 1,600 of these will be within research.
”In 2010 we announced the closure of our facilities in Lund and in Charnwood, England. What we did then, and are continuing to do now, is to run fewer geographic sites with our own activities, and instead are investing more in partnerships with academic institutions and other companies. Employees are a large fixed cost in R&D. In order to increase our flexibility we have decreased the number of internal staff, while we are increasing external collaborations,” says Anders Ekblom, Head of the Science and Technology Integration Office at AstraZeneca. 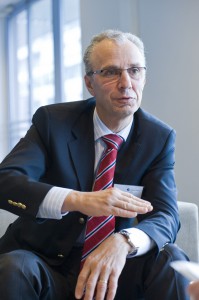 He agrees that the Asian countries offer very competitive possibilities, as well as high competence. In fact, all of the company’s data management for their clinical studies is handled by a partner company, Cognizant, an Indian/US company, as is part of their safety case report handling. In this area AstraZeneca are working with Tata consulting. AstraZeneca also recently signed a deal with Chinese WuXi Pharma Tech.

“AstraZeneca is not much different from other corporations that at times buy services and decrease internal activities that can be acquired with high quality at an attractive price. There is no contradiction in buying services from different kinds of sub-contractors in Asia and at the same time continuing with the business in Europe or the US.”

But even if the Asian countries can be beneficial in many aspects, Ekblom highlights the importance of keeping activities in Sweden.

“As a company we have a clear focus on patients and great science, in order to achieve scientific leadership and return to growth. That is why we have chosen to establish three strategic, global R&D centers, one of them being here in Sweden. Mölndal has proven to be a highly qualified place. Here we have two of our prioritized therapy areas; Cardiovascular and Metabolic diseases (CVMD), and Respiratory, Inflammation and Autoimmunity (RIA)”, says Ekblom, who is also President of AstraZeneca Sweden AB.

Their impact as a corporation is not to be underestimated. AstraZeneca is a huge employer and in Mölndal the company has more than 2,000 researchers from 30 different countries.

“AstraZeneca’s ambition is to remain in places where we can develop our business. But introducing new pharmaceuticals onto the market is a tricky business, since it often takes a long time before the product is used within health care. If we want Sweden to continue to be an innovative country, we also need to make use of our innovations. This is an extremely competitive and global industry and we also have to look at what Sweden can do to increase its attractiveness as an investment area for companies,” says Anders Ekblom.

“For the last ten years, the pharmaceutical industry as a whole hasn’t had the desired productivity to introduce enough new products to counterbalance the possibility of a total downturn in sales, as current major products are  subject to competitive generics. How the industry will be able increase its output of new successfully registered and promoted products remains to be seen,” says Nils Bohlin.

The World Economic Forum has selected the company as one of the 2021 Technology Pioneers. “We are extremely honored to be acknowledged by such a globally respected organisation,” says Karim Engelmark Cassimjee, CEO and co-founder of EnginZyme. “Our team is committed to solving one of the fundamental challenges of our…

The European Union’s decentralised procedure is being used as a model to accelerate the assessment of applications for generic medicines as part of the International Generic Drug Regulators Pilot. The EU is currently leading an international pilot project through which it will share the assessment reports generated as part of…

Lundbeck, AstraZeneca & Novo Nordisk on ‘A List’ for climate change

A new global ranking puts Lundbeck, AstraZeneca and Novo Nordisk in the top 2% of more than 8,400 companies evaluated for their actions against climate change. The companies’ efforts to reduce CO2-emissions and energy consumption has been recognized by the independent interest group Carbon Disclosure Project (CDP), which sets the…

The next pharma generation

On April 24, representatives from the Swedish life science industry met at the PwC headquarters, Stockholm, for a seminar on the future of pharma.…