Making room for a Scandinavian culture

Linn Mandahl is steering the Scandinavian arm of AbbVie, and in times of both internal and external changes, a strong culture as a platform is her key to success.

In 2019, a Scandinavian organization in the global biopharmaceutical company AbbVie was formed. The merge of the Swedish, Danish and Norwegian operations included around 230 employees and offices in Stockholm, Oslo and Copenhagen. Linn Mandahl, former CEO of AbbVie Sweden and today CEO of AbbVie Scandinavia, led the transition work.

“One of the differences between the three countries was that the Swedish organization was larger than the other two. With size comes more management structure, guidelines and more distance, since everybody cannot collaborate spontaneously in the same way when there are so many,” she says.

Linn Mandahl and her colleagues could see that Denmark and Norway sometimes understood each other better, and therefore they could sometimes create more simple and dynamic solutions.

“But it is easy to focus on differences in national cultures, we actually have far more similarities than differences,” she adds. “It was really exciting because when we merged the three organizations we saw that we, independently of each other, have been working with similar focus areas to create the successful culture we have in the different countries. All three countries had been focusing on seven important issues, which today is what we call our Recipe for Culture (Kulturrecept).”

This Recipe for Culture was one of the reasons why AbbVie Scandinavia was announced the 5th best workplace earlier this year, according Great Places to Work’s annual employee survey. The high ranking is a result of the employees’ opinions on how the company acts within five areas: credibility, respect, equity, pride and fellowship. AbbVie’s employees gave the company a trust index of 91 percent and 97 percent of the employees are proud to be working at AbbVie. Part of the results are also based on the company’s culture report, which describes how AbbVie as an employer is working long term to create a culture that nurtures both the employees’ and the organization’s wellbeing.

“The first thing we did when we created our Scandinavian organization was to take stock of the success factors that in all three countries have placed them on top for several years when it comes to the best places to work. The result of this stocktake became the new concept, consisting of seven main ingredients.”

“In less than a year, we have managed to receive such a great feedback from our employees, and that feels amazing,” says Mandahl.

So what does the Recipe for Culture mean and what are the ingredients?

“The first thing we did when we created our Scandinavian organization was to take stock of the success factors that in all three countries have placed them on top for several years when it comes to the best places to work. The result of this stocktake became the new concept, consisting of seven main ingredients,” says Mandahl.

The recipe includes creating a meaningful why, focused and common goals – and a clear and regular leadership communication, putting effort into the leadership, the self-leadership and every employee’s development, forming dedicated culture clubs in every country and on a Scandinavian level, and putting the patient in focus – for real. It also includes celebrating success, taking social responsibility and contributing to society by engaging the employees. And finally it includes measuring success, and taking actions on the result.

“The first ingredient, creating a meaningful why, means that we, the management team, continuously communicate why we are here and what our common goals are.”

“The first ingredient, creating a meaningful why, means that we, the management team, continuously communicate why we are here and what our common goals are. Then we have specific and ambitious plans for every ingredient and we make sure to engage as many employees as possible in every issue, because involvement and commitment are the core in our culture,” says Mandahl. For example, concerning the second ingredient, i.e., putting effort into the leadership, the self-leadership and every employee’s development, AbbVie has a 5-day leadership program, Leadership Essentials, offered to every leader during 2020.

“Another example, part of ingredient six, contributing to society by engaging the employees, is that every year we give our employees the opportunity to participate in a practical societal contribution. In Sweden we call this Möjligheternas Dag (Day of Possibilities) and last year we dedicated this day to helping the Ronald McDonald family houses that are located in Sweden,” she says.

Linn Mandahl joined AbbVie in 2017, as CEO of AbbVie Sweden. She began as a pharmacist  and has experience from different executive roles within the pharmaceutical industry, for example as sales, marketing and business area manager. Before AbbVie she was the CEO of Takeda Sweden. As a CEO, I asked her about the challenges she experienced in leading this change of creating a common Scandinavian culture.

“Culture is perishable and it is a challenge to really keep the culture vibrant, relevant and engaging at all times. For example, I need to communicate openly and clearly and keep our recipe for culture boiling by listening to and addressing new needs and challenges that occur.”

“Culture is perishable and it is a challenge to really keep the culture vibrant, relevant and engaging at all times. For example, I need to communicate openly and clearly and keep our recipe for culture boiling by listening to and addressing new needs and challenges that occur. A vibrant culture is very much about involvement and commitment and this requires constant focus and efforts around all of our seven ingredients,” she says. 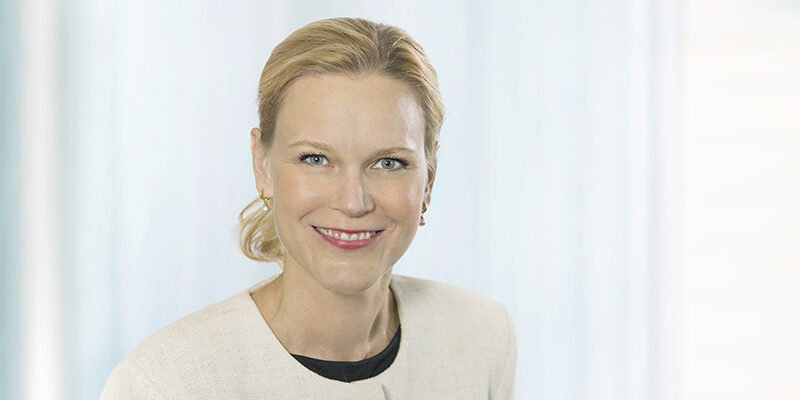 Mandahl also says that the last two years, which have involved the formation of the Scandinavian organization and also the ongoing integration with Allergan that AbbVie is in the middle of (the 63 billion USD acquisition was completed in May 2020), have required extra large demands on having vibrant and qualitative cultural work. “But having a strong culture as a platform during these times of major changes is also the key to being able to succeed in a good way.”

Recently, Linn Mandahl became a member of the Danish-Swedish life science cluster Medicon Valley Alliance’s Board, contributing to the bridge-building between the two countries.

“To join forces and collaborate across borders is natural and important in order to create conditions for our citizens to get access to the latest medical innovations, increase the region’s competitiveness within industry, healthcare and academia, and to create job opportunities. Globally within AbbVie we are happy to position the region as an exciting and dynamic region for new potential partnerships and business opportunities,” she says.

AbbVie is a relatively young company; it was formed in 2013 when Abbott was restructured and its biopharmaceutical arm became a separate company (Abb stands for its long history from Abbott and Vie for improving lives). The company is focusing on four main areas; immunology, neurology, oncology and virology. For example, it is developing treatments for inflammatory skin, joint and gastrointestinal diseases, Alzheimers disease, multiple myeloma, glioblastoma, and hepatitis C. Globally AbbVie has around 47 000 employees, including researchers, scientists, communicators, manufacturing specialists and regulatory experts, located in over 70 countries.

Just as in the Scandinavian organization, the company has also globally received several awards and recognition for its human resources work, including more than 40 top employer great places to work ratings. Other recognitions include Science Magazines’s Top Employers, Fortune’s100 Best Companies to Work for and Working Mother’s 100 Best Companies.

Similarly to most companies, AbbVie has been affected by the COVID-19 pandemic, but Mandahl emphasizes that she has never been as proud to be working at the company as she is now. Early on she and her colleagues set a clear focus as an organization, she says, “To proactively contribute to solving this global health challenge.” The company’s efforts have a foremost focus on health and safety for its employees, healthcare staff and patients, but also on society.

“For example we are supporting and collaborating with selected global health authorities and institutions around clinical trials and research related to COVID-19. We have made great efforts to secure production and delivery of our pharmaceuticals and we have also been able to speed up our manufacturing within areas where there is an increased need.”

Apart from donating medicines in demand to countries in need and to new studies, the company has donated 35 million USD to support caregivers, patients and societies severely affected from COVID-19. In Scandinavia the company has also made targeted donations to organizations in extra need right now.

“For example in Sweden we have chosen to donate money to BRIS, Children’s Rights in Society, because the pressure on them is extra high right now and many children are experiencing domestic violence, as well as severe loneliness when isolation is the new norm. We hope that our contribution can make it possible for more children to come into contact with and to get support from a counselor,” concludes Mandahl.

The Board of Directors of Targovax has signed a joint demerger and merger plan, respectively, for the transfer of the operational activities of the company to its wholly-owned subsidiary, Targovax Solution AS. The transfer is proposed carried out as a “drop-down demerger” where the company demergers operations and assets to…

Nordic Life Science asked Göran Forsberg, CEO of Cantargia, about Cantargia’s future plans and his reactions to the Nobel Prizes. Congratulations on the listing on the main market Nasdaq Stockholm. What does this mean for the company? “Thank you! This means that the company will receive more exposure and attention.…

Sana Alajmovic, founder and CEO of Sigrid Therapeutics, was voted the winner of the Female Founders competition 2021 as voted for by readers of the publication Dagens Industri. “It’s a great honor, not least because many of the others nominated are my role models. It has been my goal to…