In a new study, published in Science, researchers from Karolinska Institutet in collaboration with researchers at the University of Bonn in Germany and the Scripps Research Institute in California, show that a combined nanobody had a particularly good effect – even if the virus mutated. According to the researchers, the nanobodies have the potential to be developed into a treatment for COVID-19.

Specific proteins, spike proteins, on the surface of the SARS-CoV-2 coronavirus help the virus infect host cells. Therefore, antibodies that block the spike proteins and prevent them from binding to the cell can be a way to stop infection. From the perspective of potential therapeutic interventions, small fragments of antibodies, referred to as single-domain antibodies (sdAb) or nanobodies, may be a better alternative than regular antibodies, describe the researchers. That is because nanobodies are significantly smaller. They are therefore able to bind to the virus in more places than regular antibodies. Nanobodies also have greater stability and are easier to produce cost-effectively on a large scale. 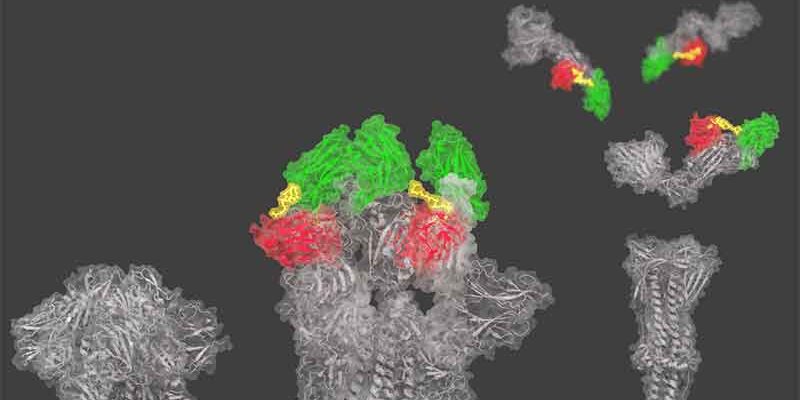 “What is uniquely special here is that we have stitched together nanobodies that bind to two different places on the spike protein of the virus,” explains Martin Hällberg, researcher at the Department of Cell and Molecular Biology at Karolinska Institutet, and one of the research study’s corresponding authors. “This combination variant binds better than individual nanobodies and is exceptionally effective in blocking the virus’ ability to spread between human cells in cell culture.”

Additionally, the combined nano-antibodies worked even when tested on a virus variant that mutates extremely quickly. “This means that the risk is very small that the virus would become resistant to these combined nanobodies,” says Hällberg.

To generate the nanobodies, alpacas and llamas – animals whose immune systems naturally produce both antibodies and nanobodies – were vaccinated with the spike protein of the coronavirus. Among the nanobodies generated by the animals, the researchers selected the best binders. Among these, four were identified as showing an exceptional ability to block the virus’ ability to spread among human cultured cells.

The research group then used electron cryomicroscopy (cryo-EM) to study in detail how the various nanobodies bind to the virus’ spike protein. Thanks to their structural knowledge, they were able to propose suitable protein links to bind different nanobodies together into combinations relevant for research, as well as provide a possible explanation for the mechanism of how the antibodies neutralize the virus.

“My ‘favourite’ is the nanobody from the llama,” Hällberg says. “It binds directly over the surface where the virus binds the host cell receptor ACE2, and the nanobody also shares a large majority of the amino acids critical for binding with ACE2. What this means is that the virus will have an extremely difficult time mutating extensively on that surface and at the same time being able to bind ACE2. A variant where this llama antibody is linked to one of the antibodies from alpaca was a fox trap that the virus never managed to get out of in our experiments.”

The researchers now hope that their nanobodies will be able to be developed into a drug treatment as a complement to a vaccination against COVID-19.

“It possibly could be used clinically for those already ill, or for prevention for individuals who for one reason or another cannot be vaccinated, or who have a weakened immune system, and therefore may not form a sufficiently strong immune response after a vaccination,” explains Hällberg.

Further studies on the way

Dioscure Therapeutics, a spin-off company from the University of Bonn, will be conducting further testing of the nanobodies in clinical trials. The researchers at Karolinska Institutet will make attempts to improve the binding further by changing individual building blocks in the nanobodies.

The British Ambassador to Sweden, Judith Gough, visited Karolinska Institutet on Walpurgis Eve to discuss the COVID-19 research being led by Lars Engstrand at Karolinska Institutet and SciLifeLab in collaboration with KTH and with primary funding from Knut and Alice Wallenberg Foundation. “This is a good opportunity to see what…

Vicore Pharma has announced that the US Patent and Trademark Office (USPTO) has granted a patent covering the use of C21 to treat infections caused by Severe Acute Respiratory Syndrome (SARS) coronavirus (CoV), including SARS-CoV-2. “COVID-19 may be just a few mutations away from evading existing vaccines, and we know…

Nine leading US and European vaccine developers have signed a pledge to continue to make the safety and well-being of vaccinated individuals the top priority in development of the first COVID-19 vaccines. The CEOs of AstraZeneca, BioNTech, GlaxoSmithKline, Johnson & Johnson, Merck (known as MSD outside the United States and…

Scientists have published an action plan for pan-European defense against new SARS-CoV-2 variants in the Lancet. The B.1.1.7 and B1.351 variants, first identified in the UK and South Africa, respectively, have spread to many European countries. Although the biological properties of these variants are yet to be characterized, epidemiological data…