For young scientists and engineers, a startup can be part of early training and education.

Andreas Laustsen and Hans Genee sit in a light-filled atrium at Copenhagen’s Symbion incubator space, home of synthetic biology company Biosyntia, and reminisce. “We did bicycle together to work often,” Laustsen says to Genee. “You don’t remember because you’re faster.” The two were students at the Technical University of Denmark (DTU) when they cofounded Biosyntia in 2012. They’re now on different career tracks but share a vision of life science solving global problems. And they’re clearly friends.

In 2012, Laustsen was finishing a master’s degree and Genee was doing PhD work in Morten Sommer’s lab. Sommer, the third Biosyntia cofounder, is now a professor at the Novo Nordisk Foundation Center for Biosustainability at DTU (DTU Biosustain). At the time, though, the laboratory was new. Genee’s studies on microbial gene expression and selection, the basis of Biosyntia’s fermentation approach to making biobased natural ingredients such as vitamins, had just begun.

Genee and Sommer submitted their research as a project for the Biobusiness and Innovation Platform Entrepreneurship Project Course. In the class, business and biotech students from DTU, Copenhagen Business School, and University of Copenhagen develop a commercialization plan for an innovative idea. The business plan that resulted from Genee and Sommer’s project nucleated Biosyntia.

Genee and Laustsen knew each other from Biotech Academy, a DTU graduate student organization that creates research activities for schools. Their first collaboration, though, was for a US entrepreneurial course that included planning a startup. “We worked for a week on a Biosyntia strategy,” Genee says. “Then decided to explore how far we could take it commercially.”

Biosyntia won the Cleantech & Environment category of the 2012 Venture Cup, a national contest in which teams present business ideas. The next hurdles included funding and paperwork. Biosyntia was the first startup to develop a technology licensing agreement with DTU Biosustain, so the company, Laustsen says, “was the guinea pig.” Support from Novo Seeds, which funds startups at the earliest phase, and the European Commission were critical, he says. “That enabled the first hires.” Biosyntia now has 16 employees and is preparing to seek series A funding.

Laustsen and Genee have earned numerous accolades. Laustsen was named Denmark’s Coolest Engineer by the Engineer the Future alliance, and is on a Forbes 30 Under 30 list. Both were recognized as Top 10 European Biotech Entrepreneurs Under 30 by Philip Hemme, CEO of digital media company labiotech.eu, a young entrepreneur himself. The two are ambitious, skilled at fundraising and, Hemme says, “good at networking and finding experienced mentors.”

Genee and Laustsen show two entrepreneurial career paths. Genee started Biosyntia while still getting his education. He joined full-time after graduation and now does work he loves. He’ll take company as far as he can and enjoys the challenge of each new phase.

“It’s been interesting to grow Biosyntia from an idea on a petri dish to a company,” he says. “I’m involved in everything from deciding which gene to edit to considering our strategic landscape. I learn with the company. I like new challenges and I’m fuelled by curiosity, so I’m always interested in what comes next.”

Laustsen worked at Biosyntia for about two years around his master’s and PhD work, doing the “gruntwork” of building a company from scratch. He’s still a shareholder but has no other role at Biosyntia except “drinking coffee and talking with Hans.” Laustsen plans to do academic research, moving promising results into startups, like Morten Sommer. He has founded four other companies so far: Chromologics (natural colorants); Bactolife (biotherapeutics); Antag Therapeutics (peptide drugs for metabolic disease); and VenomAb, (monoclonal antibodies against snake venom). He says, “Thinking about possible commercialization gives research an extra dimension. As you plan experiments you also think about meeting user expectations.”

Laustsen and Genee consider themselves third-generation biotech entrepreneurs. In Denmark, Laustsen explains, the first startup founders had corporate backgrounds, like his father Mads Laustsen, who was at Novo Nordisk before cofounding CMC Biologics and is now at the antibody therapy company Symphogen. The model was big pharmaceutical companies. As the environment changed, the next biotech entrepreneurs saw other options such as selling discoveries to larger companies. A striking feature of entrepreneurs today, Genee and Laustsen say, is social responsibility.

“People want to work on something meaningful,” says Genee. “As a scientist, when you make a discovery that could make a difference in the world, you have an obligation to bring it to society. Some people find new antibiotics or drugs. Biosyntia has ways to make biobased instead of petrochemical-based products. We focus on this when recruiting to get people who are truly motivated.”

Laustsen’s research and business theme is sustainable products, solutions, and biotherapies for underdeveloped countries. “This is also something that millennials, the newest generation of scientists, cares about,” he says. “That’s good, because we’re motivated to make the world better, as long as people are realistic about how to start a company and get money to keep it going.”

Genee and Laustsen have advice for policymakers, the industry, and young professionals in science, engineering, and business. The Nordic region has vast biotech potential, they say. Denmark, for example, is overrepresented for its size in international startup competitions. “We’re good at training people to pitch and start a company,” Genee says. “We need support for the next step—continued development to take startups to sustainable businesses.”

Young entrepreneurs need wise mentors who balance stringent criticism with flexibility. Advisors, Laustsen says, are “a good sanity check” but should realize that the professional growth of trainees is exponential and multidirectional. Genee encourages letting advisees play with ideas to get to a “sweet spot” of a viable plan with adaptability about implementing it. “It’s important in startups to get things going and have momentum and adjust as you go,” he says. “Like in science, you’re making, testing, and adapting a commercialization hypothesis.”

Without a track record, Genee and Laustsen say, young people must work extra hard to prove their ideas and worth. A solid team can help. “Everyone says this,” Genee says, “but create a good team that adapts and pivots depending on market conditions and competitors and other factors.” Get lots of feedback and advice, he suggests. For students in Denmark, the Synapse organization can help with life science careers. Young professionals have the Rising Entrepreneurs in BioBusiness and Life Science (REBBLS) network. Genee and Laustsen are members and Laustsen is a cofounder.

Above all, Laustsen and Genee say, don’t be afraid to take risks. “Even if your project fails,” Laustsen says, “you’ll learn a lot about creating value from your work.” Along the way, he says, “You’ll support other people in their professional development.” Genee adds, “And we hope inspire people to do work they’re proud of.” With that, the two shoulder their backpacks and get their bicycles, Genee’s now with a child’s seat on the back. They ride off together, continuing their conversation as they go. 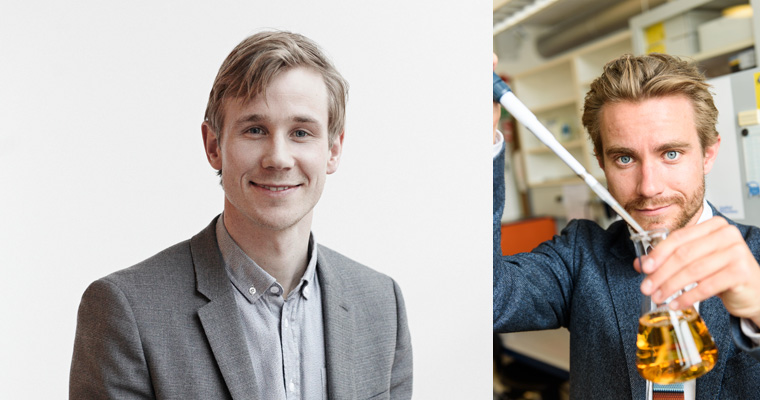 Family: Lives with his girlfriend

From the left: Hans Genee and Andreas Laustsen

Malin Parkler, CEO of Pfizer Sweden, is driven by curiosity and a passion to build knowledge and evolve the life science industry – with the ultimate goal to yield real benefits for patients. Rarely has the world been more in need of leaders. As the global community struggled with the…

The oncology biopharmaceutical company announces that it has raised NOK75 million (c.$12.5 million) from a syndicate of new and existing investors through a private placement. This follows a $6.0 million round in May 2013. According to BerGenBio proceeds from the financing will be used to support the development of the…