On 7 October 2019, Sir Peter J. Ratcliffe was having a typical scientist’s day, writing a grant proposal. Then, Ratcliffe, who is Director of Clinical Research at the Francis Crick Institute and Director of the Target Discovery Institute at the University of Oxford, got a call. The Nobel Committee told him that he, William Kaelin of Harvard University, and Gregg Semenza of Johns Hopkins University were awarded the Physiology or Medicine prize for “discoveries of how cells sense and adapt to oxygen availability.”

We still have much to learn in this area, Ratcliffe says: “Maintaining oxygen homeostasis across the 40 trillion cells in the body requires great precision and accuracy. Even a short lapse in oxygen causes trouble.” Fortunately for the field, he finished the grant proposal, with his coapplicants Drs. Peppi Karppinen and Johanna Myllyharju from University of Oulu in Finland taking over writing while he handled the Nobel publicity.

The Oulu scientists took time to celebrate, though. They learned of the award during a campus event to watch the Nobel announcement live. “We guessed as soon as they said ‘William’,” Myllyharju says. The event was chaired by Karppinen, who did postdoctoral work with Kaelin. “Johanna and I quickly organized a celebration for our research groups,” she says. “We toasted the Nobels and sent photos to Bill [Kaelin] and Peter.”

The details of how cells sense and respond to lack of oxygen, or hypoxia, were a mystery before the Nobel-winning work. The Ratcliffe, Semenza, and other groups studied how hypoxia increases transcription of the gene for erythropoietin (EPO), a kidney hormone that signals for more red blood cells. The Ratcliffe lab showed that cells that do not produce EPO use the same mechanism, operating on different genes, to respond to hypoxia.

“The discovery that this system operates in a widespread fashion meant it doesn’t just regulate EPO but does countless other things. This implied physiological importance in all sorts of cells and potential importance in medicine.”

“The discovery that this system operates in a widespread fashion,” Ratcliffe says, “meant it doesn’t just regulate EPO but does countless other things. This implied physiological importance in all sorts of cells and potential importance in medicine.” That impact is seen today in drugs targeting the hypoxia-response system that are in use or development for anemia, cardiovascular disease, cancer, and more. 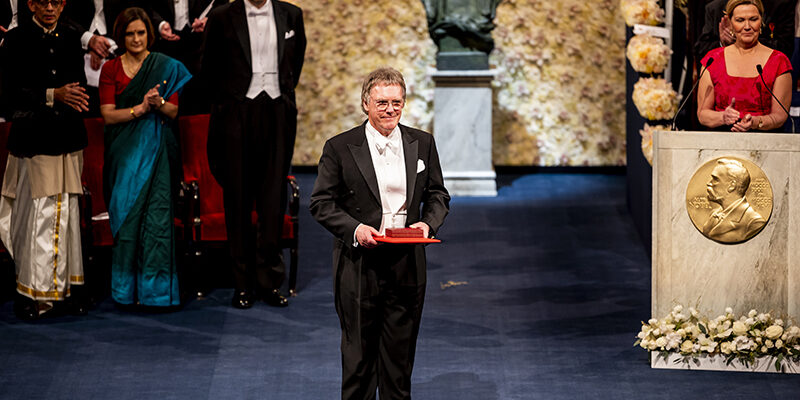 The hypoxia system is complex. The Semenza lab found the crucial transcription regulator: hypoxia-inducible factor (HIF). The Kaelin lab discovered that the ubiquitin ligase VHL (linked to von Hippel-Lindau disease, which increases cancer risk), tags proteins for proteosomal degradation. Then the Ratcliffe and Kaelin groups co-published the mechanism. They showed that HIF is usually modified by prolyl hydroxylation that allows interaction with VHL, which marks HIF for degradation. In hypoxia, HIF is not hydroxylated or degraded so it activates hypoxia-related genes.

Panu Jaakkola was a postdoctoral fellow in the Ratcliffe group and a first author on the lab’s groundbreaking paper. “We knew that HIF had to be marked somehow,” says Jaakola, now professor and research director at Helsinki University Hospital Cancer Center. “It was surprising that it was with prolyl hydroxylation.” At the time, this modification was known only for the structural protein collagen. And what was known came from Finland. “When we understood that this was prolyl hydroxylation,” Jaakkola says, “I contacted Kari Kivirikko.”

The University of Oulu continues to be strong in the field, says Kappinen. She was a PhD student with Kivirikko and explains how he launched studies on hydroxylases and their larger enzyme family of dioxygenases when he started at Oulu in the early 1970s. “When Ratcliffe and Kaelin discovered HIF prolyl hydroxylases,” she says, “we had a jump start.” Oulu scientists had activity assays and protein production systems for studying related enzymes, so they did the first indepth biochemical analyses of the HIF-modifying enzymes.

Kivirikko, now emeritus, is still involved in FibroGen, a company he cofounded based on his collagen work. Among FibroGen’s drugs is roxadustat, a small molecule inhibitor of HIF prolyl hydroxylase developed with AstraZeneca and Astellas. The drug is approved or pending approval in Asia for anemia in chronic kidney disease.

The list of other diseases that might be treated with hypoxia-targeting drugs is vast. Candidates now in clinical trials are in two categories, Ratcliffe explains. One type that includes roxadustat and drugs from GSK and Akebia augments the natural hypoxia response by inhibiting HIF prolyl hydroxylase. In addition to anemia, these drugs could help recover from low oxygen in ischemia and circulatory diseases. The other type inhibits HIF and has promise in early trials for kidney cancer. This is the direction that Jaakkola took after the Ratcliffe group. “I’m an oncologist,” he says, “so my interests are in the effects of the oxygen-sensing system in cancer cells, mainly kidney cancer.”

Oulu researchers study another possible therapeutic indication: metabolic disease. In hypoxia, the body reprograms its metabolism, Kappinen explains. Early data suggest that drugs that imitate this response may have benefits for weight management, cholesterol levels, insulin sensitivity, and fatty liver disease. The hypoxia response is ubiquitous, so a clinical upside is many applications. The downside is the need for exquisite specificity. As Ratcliffe puts it, “We want to activate part but not all of the cascade in a given disease and it’s not always clear how to do that that.”

Knowing more pathways in the hypoxia response could identify more drug targets. Ratcliffe’s collaborations with Oulu researchers include looking beyond HIF and its hydroxylases to other oxygenases. “The hypothesis,” Ratcliffe says, “is that these enzymes that directly use and incorporate oxygen into substrates are other candidates for oxygen sensing and control mechanisms. Those are the types of enzymes that we’re looking at.”

“It’s so satisfying that we described oxygen sensing that has been around since animal evolution. That’s a discovery for all time, so we’re just rejoicing in that.”

From his experiences with a spinoff company and consulting, Ratcliffe says he has great respect for the work of generating safe, effective drugs based on research results. He tracks clinical developments that arise from his work but focuses on basic research. “It’s why I’m so passionate about the scientific discovery process,” he says. “It’s so satisfying that we described oxygen sensing that has been around since animal evolution. That’s a discovery for all time, so we’re just rejoicing in that. To put knowledge on the table and see how people use it in unexpected ways for the good of society. That’s what you hope when you put knowledge out there.”

The Royal Swedish Academy of Sciences has decided to award this year’s Nobel Prize in Chemistry to Emmanuelle Charpentier and Jennifer A. Doudna for the development of a method for genome editing. In 2012 the two scientists, Jennifer Doudna and Emmanuelle Charpentier published their ground-breaking findings about the mechanisms behind…

She receives the FEBS | EMBO Women in Science Award