Philadelphia – A fertile ground for innovation

Philadelphia has a long legacy of life sciences and success and now, cell and gene therapy is fast becoming a local specialty.

Mention Philadelphia, Pennsylvania, in the U.S., and the first thoughts usually go to its role in the nation’s formation and early history: the writing and signing of the Declaration of Independence in 1776 and the home of the iconic Liberty Bell.

But fast forward a few centuries and Philadelphia now has an extensive and innovative life sciences sector that is attracting attention not just in the U.S., but from abroad as well. Data from Select Greater Philadelphia indicates that 87 percent of all U.S. pharmaceutical and biotech companies have offices in Philadelphia and 30 companies focusing on cell and gene therapy development, which is fast becoming a local specialty, also call the city home. Combine that with some of the nation’s leading universities and medical centers in Pennsylvania and the area is fertile ground for innovation.

“Philadelphia has significant regional hubs helping to create a perfect mix of environment and resources to inspire and commercialize innovation.”

“The life science ecosystem in Philadelphia is driven by thoughtful leadership, talent and businesses, which are supported by world-class research and development institutions, top-notch universities and incubators,” says Ulf Åkerblom, honorary consul of the Consulate of Sweden in Philadelphia. These attributes are attractive to businesses in Sweden and elsewhere. “Philadelphia has significant regional hubs helping to create a perfect mix of environment and resources to inspire and commercialize innovation. Shared factors such as research-oriented institutions, high-growth companies, and tech and creative startups in vibrant, amenity-rich residential and commercial environments, are setting the city apart in the tech landscape,” Åkerblom adds.

Those are just some of the amenities groups such as Life Sciences Pennsylvania (LSPA), the trade organization for the commonwealth, is extolling as it spreads the word about Philadelphia and Pennsylvania’s welcoming environment for life sciences.

“Our role as a trade association is as an advocate; we’re trying to make the environment favorable to businesses and create a broad macro environment,” according to Christopher P. Molineaux, president and CEO of Life Sciences Pennsylvania, which has 864 members. “We’re trying to attract companies by creating an environment better than any other state – and that includes beating back bad ideas.”

The differentiator between Philadelphia and other regions

Cell and gene therapy are dominating the headlines, and that is the differentiator between Philadelphia and other regions, Molineaux continues.

“Several cities have scientific communities looking at personalized medicine and have developed targeted drugs. Here cells are being modified to address disease; that’s where we’re strongest.”

For example, Philadelphia company Spark Therapeutics, since late 2019 a part of Roche Group, is focusing on blindness, hemophilia, lysosomal storage disorders and neurodegenerative diseases. The company, founded in 2013, is a result of research performed over two decades at Children’s Hospital of Philadelphia (CHOP) and the therapies have the potential to provide long-lasting effects. Spark’s Luxturna, a one-time gene therapy indicated for the treatment of patients with confirmed biallelic RPE65 mutation-associated retinal dystrophy and viable retinal cells, is the first gene therapy for a genetic disease approved in both the U.S. and EU. 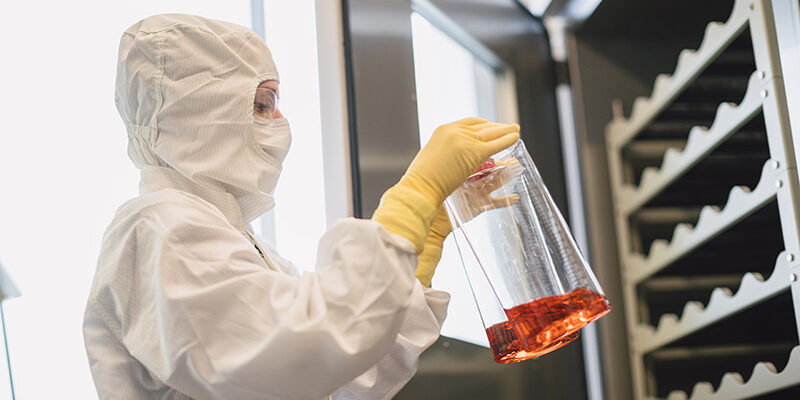 “We hope the historic approval of Luxturna continues to serve as a catalyst for the field of gene therapy, improving our collective capabilities so that we may together, someday, conquer the realm of inherited disease,” said Katherine A. High, president and head of R&D at Spark Therapeutics.

Another innovative cell and gene therapy company in Philadelphia is Imvax. The company’s initial objective is to define the treatment for Glioblastoma multiforme (GBM), the most common and lethal malignant brain tumor in adults. The company has demonstrated safety and proof of concept for an autologous cell vaccine in patients with recurrent and newly diagnosed GBM thus far, and its ongoing clinical trial serves to establish the recommended treatment regimen for future clinical trials.

A third example is Adaptimmune, a company that has developed a cell therapy platform that engineers T-cells to target and destroy solid tumors. The company, who employs around 150 people in Philadelphia and 400 worldwide, has ongoing early clinical trials that address solid tumors, liver cancer and synovial sarcoma and the company plans to launch an inaugural commercial treatment fro sarcoma patients in 2022.

One of the shifts in the sector over the past five to ten years has been the explosion of new businesses, according to Molineaux. While Philadelphia long has been home to large pharmaceutical companies, over the past decade, many of them had to downsize and assign tasks to other companies.

“Between 2014 and 2019, there were 478 new life science companies in Pennsylvania. Now there are more than 2 800, and about half have ten employees or fewer. This is very promising for the growth of the life sciences ecosystem.”

“There has been enormous growth of start-ups founded by former pharmaceutical executives,” Molineaux explains. “They took their expertise with them. Between 2014 and 2019, there were 478 new life science companies in Pennsylvania. Now there are more than 2 800, and about half have ten employees or fewer. This is very promising for the growth of the life sciences ecosystem.”

The start-up boom began when pharmaceutical pipelines were not keeping up with patent expirations, so some of the company functions were outsourced, according to Molineaux. “Processes that every pharmaceutical company followed, such as flow cytometry – a system used to screen cells to identify healthy and diseased cells to develop strategies to attack diseased cells– were outsourced. Johnson & Johnson opted to outsource flow cytometry, and the head of flow cytometry went out and started his own group, and was hired by Johnson & Johnson as a contractor.”

For the past two or three years, one of the biggest challenges to developing the sector was lack of capital, but recently that has turned around.

“In the last 18 months, there has been an opening of pocketbooks for investment in life science research, an influx of capital we haven’t seen in years,” says Molineaux.

Another obstacle has been recruiting executive talent. “Running a start- up is hard, and the odds of success in life sciences is very difficult,” he says. “If you are successful, then you are very successful, but it’s hard attracting CEO talent.”

One effort to help with this is a partnership between the University of Pennsylvania technology department and the Wharton School, which is UPenn’s business school.

Building on a solid record of success

The life sciences and medicine have a long history in Philadelphia, noted Molineaux calling it home to several medical firsts, including the nation’s first medical school and teaching hospital as well as the first pharmacy school and children’s hospital in North America. “There has been a long legacy of life sciences and success.”

The Philadelphia College of Pharmacy, now called the University of the Sciences, produced many of the founders of the country’s biggest pharmaceutical companies. Other local universities add to the talent pool, including the University of Pennsylvania, “which has a tremendous record of technology transfer and commercializing research from labs,” Molineaux adds.

“We’re trying to continue to build the scientific prowess of the life sciences community; we would like to see work to attract CEO talent and attract money, the third leg of the stool.”

“Some of the strongest schools in the country can be found in the Keystone State, including those that top national and global rankings, and it currently ranks among the five states producing the most STEM graduates,” notes Åkerblom. City institutions also have been successful establishing partnerships with the federal government and receiving grants from the National Institute of Health (NIH).

Building on that solid record of success, LSPA remains focused on attracting scientific and business talent.

“We’re trying to continue to build the scientific prowess of the life sciences community; we would like to see work to attract CEO talent and attract money, the third leg of the stool,” says Molineaux. “We’re about advocacy and facilitating strategic connections; we’ve created here the strongest network of different types of resources anywhere. Any kind of stakeholder in the life sciences is represented in our memberships. As network grows, that gives us more influence in advocacy.”

“Although the war has affected me a lot, I will not lose heart!”

Hello, my name is Anatolii Kovalchuk, and I am a remote developer from Ukraine. This is the story of my experience working for a European startup during the war. My remote working path as a back-end developer for the Danish life science company Knowledge Gate Group began a few months…

Takeda Pharmaceutical has announced its intention to acquire TiGenix, a biopharma company developing novel stem cell therapies for serious medical conditions, and the total value of the deal is estimated to approximately 520 million euro. As a result Takeda has entered into an offer and support agreement with TiGenix which…

As the coronavirus swept across the globe over the past year, science has been in the spotlight, sometimes embraced, sometimes vilified. The lackluster response by former US President Donald J. Trump’s administration to the coronavirus crisis at home and dismissal of much of the advice from science and health professionals…