Valo Therapeutics (ValoTx), founded in 2016, is a spin-out from Helsinki University and the research of Professor Vincenzo Cerullo. Professor Cerullo’s research group developed the unique technology platform, named PeptiCRAd (Peptide-coated Conditionally Replicating Adenovirus), by attaching small tumor pieces (peptides) to the surface of the virus to direct the immune response against the tumor.

“We inject PeptiCRAd directly into tumors, where as well as causing the lysis of cancer cells, it also trains core elements of the immune system, especially the T-cells, to recognize the cancer wherever it is, so that any other tumors elsewhere in the body can be found and destroyed too.”

“The platform is based on the selective use of oncolytic viruses [i.e., viruses that can burst cancer cells], which have been coated with disease-specific peptides to treat cancer. We’ve designed our approach to be very specific, and easily adaptable to different cancers. We inject PeptiCRAd directly into tumors, where as well as causing the lysis of cancer cells, it also trains core elements of the immune system, especially the T-cells, to recognize the cancer wherever it is, so that any other tumors elsewhere in the body can be found and destroyed too. This is critical for treating metastases and stopping the cancer from coming back,” explains Paul Higham, CEO of ValoTx.

“Part of the ‘Eureka’ moment was finding a novel way to coat viruses with cancer-specific peptides, without using chemicals.”

Cancer is a notoriously difficult disease to treat. Even with some of the best available medicines, the cancer evolves to find a way around the treatment, and resistance emerges.

“The founders wanted to provide a treatment that could conquer cancer and part of the ‘Eureka’ moment was finding a novel way to coat viruses with cancer-specific peptides, without using chemicals,” says Higham. “We do that by adding a positive charge to the peptides and creating electrostatic complexes with the negatively charged viruses.”

The company has been granted several patents, including in the U.S. and Europe, covering the PeptiCRAd platform technology.

The main focus is on cancer, where there is substantial unmet medical need, “But our technology can also be used in infectious diseases,” adds Higham. “We have done some work to see if coating COVID vaccines with peptides can make them work better, so the effects can last longer, and the immune system becomes more vigilant against new variants.”

In the near future, the company has a clinical trial planned to start this year in Germany for the common, hard-to-treat cancers of melanoma, non-small-cell lung cancer, and triple-negative breast cancer. These all have the well-known targets called NY-ES0-1 and MAGE-A3 and ValoTx will use peptides from these targets to coat the oncolytic adenovirus that they will administer to patients.

“We are looking at how our approach can make the widely-used existing approach of a checkpoint inhibitors, work better, especially in terms of overcoming the resistance of the tumor to the immune system,” says Higham. 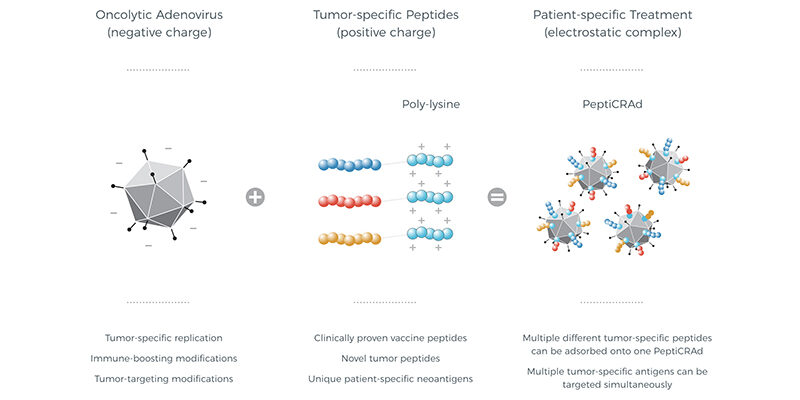 PeptiCRAd: PeptiCRAd is an oncolytic adenovirus platform, where immunogenic tumor peptides are attached onto the negatively charged viral capsid.

Besides the lead platform PeptiCRAd, the company is also developing PeptiENV and PeptiVAX, among other immunotherapy strategies in collaboration with Professor Cerullo. PeptiENV is expected to improve the therapeutic potential of enveloped oncolytic viruses in the treatment of multiple forms of cancer, while PeptiVAX is a program to develop a novel, adaptable anti-infectives vaccination platform.

Earlier this year, the company also acquired a technology called PeptiCHIP from the University of Helsinki. PeptiCHIP is a novel microchip-based technology that enables rapid, accurate, user-friendly and standardized tumor neoantigen identification from small tumor biopsies. The solution gives ValoTx a tumor’s ‘fingerprint’, and this is fundamental to the company’s plans for personalized cancer treatments, specific to the individual.

“It has 16,000 microscopic pillars, with each one able to capture peptides from the tumor tissue.”

“We plan to take a tiny piece of a tumor material from a biopsy and then use PeptiCHIP to rapidly work out which peptides are expressed only on the cancer, coat the virus with these, and then we’ll have a personalized cancer therapy. After the therapy has commenced we’ll regularly monitor the patient, as cancer is infamous for mutating rapidly, and produce a new peptide coating, matched to the new peptides the cancer is showing,” says Paul Higham. “PeptiCHIP as the name suggests is a little chip. It has 16,000 microscopic pillars, with each one able to capture peptides from the tumor tissue. From this we can identify the most relevant ones found on the tumor and then coat our oncolytic virus with those.”

Have a passion for what you do

Paul Higham, CEO of ValoTx since August 2020, has great hopes and expectations for his company. “We are reinventing immunotherapy to make it more powerful against cancer, and other diseases,” he says.

Before joining ValoTx he had a long career in pharma and biotech, focusing for the past 14 years on cancer immunotherapy. “This is my third time as CEO of an immunotherapy company. I’m fascinated by immunology, and how to train the immune system to better fight disease,” he says.

Moving forward, the business strategy is to develop several candidates for clinical use and develop an approach that allows the use of adaptable personalized therapies based on the technology platforms. “Also, our approach is likely to be much more cost-effective for health care systems, where cancer treatments based on CAR-T and T-cell therapies are very expensive. We’re working towards a simple highly adaptable and affordable approach, which can be used in a wide range of cancers,” says Higham.

His best advice to other startups and biotech’s out there is to be persistent, positive, and have a passion for what you do. “Making a new medicine is hard and can be full of setbacks, but the end goal, of transforming lives, is well worth striving for,” he says.

Being located in Finland means well structured state funding of innovative companies, says Paul Higham. “In addition, the school and university system is excellent and produces well educated scientists who all speak excellent English!” he concludes.

A new Swedish cell and gene therapy company has been launched

Elicera Therapeutics has announced that it has completed its first share issue and secured SEK 13.2 million in financing. The company is based on research by professor Magnus Essand’s research group at Uppsala University and will focus on CAR T-cells and oncolytic viruses. “In the CAR T-cell space, we have…

On International Women’s Day we like to highlight some of the many inspiring women in life science that we have had the opportunity to meet and interview. Within life science business Nordic Life Science has interviewed both young aspiring female entrepreneurs as well as well-established business leaders.     Malin…

In mid-February, two hundred researchers from academia and industry gathered in Uppsala for a meeting on diagnostics, as part of the Swedish Life Science Investment Year. Interest in cost-effective, reliable diagnostic tests is increasing worldwide. Healthcare providers and financiers are increasingly looking to state-of-the-art diagnostics for new tools to aid…

Medtech – A hotter investment sector than ever, shows new analysis

The communications consultancy company Paues Åberg has analyzed the investment interest of the Swedish life science sector and found that investments in the field of medtech has increased by 235% during the last two years. “A good approach to understand the latest trends within investor relations is to analyze raised…