Xiaowei Zhuang’s microscopy method, STORM,  has revolutionized life sciences and enabled breakthrough discoveries, and for this work she was awarded the Lennart Nilsson Award 2017.

Xiaowei Zhuang, the David B. Arnold Professor of Science at Harvard University and a Howard Hughes Medical Institute Investigator, developed one of the first single-molecule imaging methods to break the diffraction limit, i.e. an optical effect that limits the resolution of conventional light microscopes to a few hundred nanometers, which is 1-2 orders of magnitude larger than the size of biomolecules in cells.

“It was absolutely thrilling! The diffraction limit has prevented detailed characterizations of most sub-cellular structures,” describes Zhuang. “Basically, because of the diffraction of light, the images of individual molecules are a few hundred nanometers wide and thus nearby molecules separated by distances smaller than a few hundred nanometers generate overlapping images. This prevents these molecules from being resolved. This overlapping problem is the fundamental cause of diffraction-limited resolution.”

So Zhuang and her colleagues came up with the idea of separating the spatially unresolvable molecules in the time dimension, thereby solving this overlapping problem and overcoming the diffraction limit. The method is a single-molecule-based super resolution light microscopy method called Stochastic Optical Reconstruction Microscopy, STORM.

10 times better than the diffraction limit

Zhuang and her colleagues used their discovery of photoswitchable dyes to achieve this separation in time. “Specifically, at any time, we only switch on a subset of molecules in the imaging field of view, so that their images do not overlap. This allows us to determine the positions of individual molecules with high precision. Over time, many molecules are switched on and their positions are determined. We then construct the super-resolution image from these precisely determined molecular positions,” she explains.

During the experimental implementation of this idea she and her colleagues overcame many difficulties and eventually published their first STORM paper in 2006, in which they demonstrated an image resolution of 20 nm, which is 10 times better than the diffraction-limited resolution!  “This is a truly rewarding process!” states Zhuang.

With the STORM method  Zhuang has been able to illuminate the small world of biology in the most unexpected ways, reports the Jury of the Lennart Nilsson Award: ”Super-resolution light microscopy techniques have revolutionized the life sciences. With the STORM technique that was developed in Dr Xiaowei Zhuang’s laboratory, she has made breakthrough discoveries in the beautiful world of cell biology, literally making the invisible visible. Her images represent a unique combination of technical mastery, frontline science, and visual esthetics, fitting perfectly in the tradition of Lennart Nilsson.”

With STORM, many previously unresolvable molecular structures inside the cells could be resolved for the first time. For example, Zhuang and her colleagues recently discovered a periodic cytoskeleton in neurons; a novel cytoskeleton structure made of actin, spectrin and associated molecules.

“In this structure, which we termed membrane-associated periodic skeleton (MPS), short actin filaments are assembled into ring-like structures that wrap around the circumference of axons underneath the axonal membrane. These actin rings are connected by spectrin tetramers to form a beautiful, quasi-one-dimensional, periodic lattice structure with long-range order. Subsequently, this structure was shown by us and others to exist also in dendrites, but with a lower propensity and development rate than in axons. This structure is ubiquitously present in numerous types of neurons and in diverse animal species, ranging from C. elegans to human, and plays multiple functional roles,” says Zhuang.

“In addition to the MPS, STORM has allowed us to discover or elucidate many other cellular structures, ranging from signaling domains on the cell membrane and molecular assemblies in the cytoplasm, to the chromatin structures in the cell nucleus,” continues Zhuang.

And she is continuing to improve the resolution of STORM.

“Many molecules inside cells are only a few nanometers in size. Although we have already demonstrated STORM imaging with the resolution of a few nanometers in some biological samples, that has not been routinely achieved in biological systems yet,” says Zhuang. “Substantial, resolution improvement is still needed to resolve many molecular structures in cells. In addition, we are working on ways to further improve the in vivo, dynamic STORM imaging capability.” 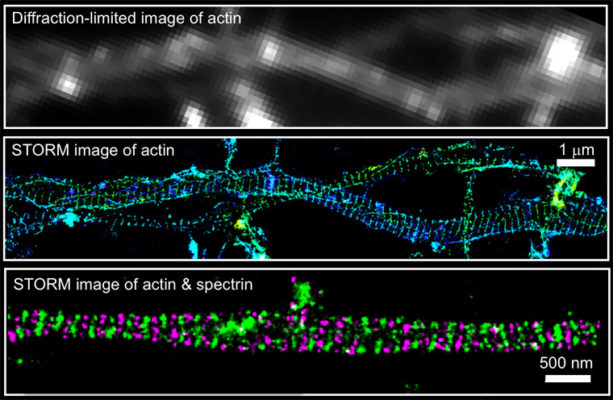 Do you think every molecule in the cell could be imaged in the future?

“I do think that is possible for biomacromolecules, and for many small molecules as well.”

Investigate the cell at the systems level

Another major direction in Zhuang’s lab is developing imaging methods with genomic-scale throughput.

“In cells, thousands of different molecular species are at work and collectively give the cell its behavior and function. Thus, it would be great if we could image these molecules all together to investigate the cell at the systems level. Towards this direction, we recently invented a single-cell transcriptome imaging method, MERFISH (Multiplexed Error-Robust Fluorescence In Situ Hybridization). In MERFISH, we introduced the idea of combinatorial labeling and sequential imaging to massively multiplex single-molecule FISH measurements and error-robust barcoding to ensure high measurement accuracy,” says Zhuang.

She and her team have demonstrated the ability to simultaneously image and identify the mRNAs of approximately 1 000 genes in single cells using MERFISH.

More recently, they also demonstrated the ability to trace the structure of individual chromosomes using a similar multiplexed FISH method. MERFISH allows quantitative single-cell omics analyses in the native context of cells and tissue, which enables the mapping of the spatial organization of the transcriptome and genome inside cells, as well as the mapping of distinct cell types in complex tissues. 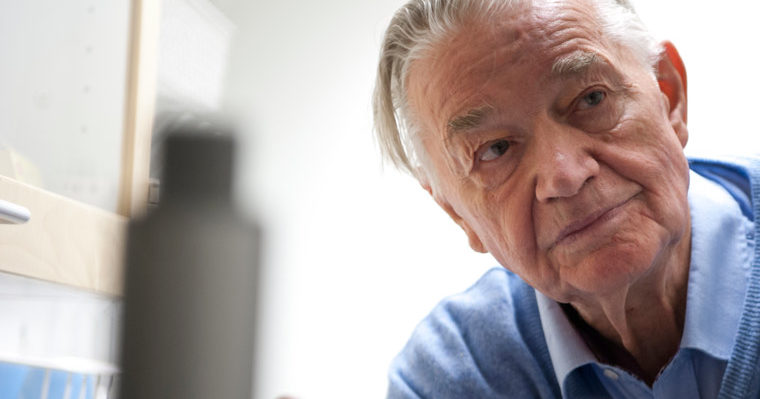 The Lennart Nilsson Award Foundation was established in 1998 in recognition of the world-renowned Swedish photographer Lennart Nilsson (1922-2017) and his extraordinary body of work. The main aim of the foundation is to promote education, training and research within the medical, biological and engineering sciences through the use of images. This is achieved through the Lennart Nilsson Award, an international award bestowed annually upon an individual in recognition of outstanding contributions within the realm of scientific photography. Award recipients are people who work in the spirit of Lennart Nilsson, revealing science to the world in beautiful, unique and powerful ways.

Since nothing is more basic to life than oxygen, Dr. Gregg Semenza, MD, PhD, found it logical to want to unravel some of the complexities of how cells monitor and regulate oxygen levels. Gregg Semenza’s research, which earned one of the three 2019 Nobel Prizes in Medicine or Physiology, opened…

Award to Uppsala researcher and surgeon