Previously scientists looked at everything at the same time, resulting in a blurry image. With the optical tricks and recent developments in microscopy, scientists can now obtain super-resolution images of objects and discover worlds which they have never seen before.

The digital developments within imaging have resulted in dramatic changes over the past decades. From earlier systems based on two dimensional x-ray images and direct examination under light microscopy, we now have digital imaging systems providing high-resolution images of different organs and entire microscopical compounds, often in three dimensions and with the possibility of reproducing changes over time. Development is rapid and implies great possibilities for improved diagnostics and treatment planning. Sweden has several internationally successful companies within medical imaging, such as Sectra, Sapheneia and ContextVision. The academic research within imaging is also internationally renowned, especially within MR and super-resolution microscopy.

“For the last ten years there has been a great deal of technical development. Sweden has had a long tradition in developing techniques. We have mainly been driven by biomedical questions, but have also had close integration with technical implementation. Today, we have a leading position in Sweden in working with what is known as super-resolution microscopy. However, it will take a while before the changes start coming from the practical perspective. The implementation is still in its early stages, as the systems are quite expensive and demand high competence,” says Hjalmar Brismar, Professor of Biological Physics and Director of the Bioimaging platform at SciLifeLab Stockholm.

One of the pioneers in medical photography is world-renowned photographer Lennart Nilsson. In association with researchers, and with the help of advanced, specially designed equipment, he has documented the inside of man down to the level of a single cell. Throughout the years, he has devoted special attention to capturing the creation of a human being, from conception to birth. At the end of the 1940s, when he was assigned to do a portrait of a professor at Sabbatsbergs Hospital in Stockholm, he happened to see some embryos stored in glass jars. The fact that embryo development was so far progressed at just a few weeks of age so captured his attention that he photographed them. He showed the photos to the American Life Magazine and the images were received with such enthusiasm that they were published and Lennart Nilsson continued his photography of man. This led to his most famous work “A child is born”, with revolutionizing photographs of the development of the human embryo and fetus from conception to birth.

Today, Lennart Nilsson’s legacy is continued by new pioneers and in recognition of his work the Lennart Nilsson Award was established in 1998, honoring people who work in his spirit, revealing science to the world in unique, beautiful and powerful ways. The award is presented every year and comprises a diploma and a sum of SEK 100,000. In 2012 the award was given to Hans Blom PhD, associate professor of biological physics at the Royal Institute of Technology (KTH) and facility manager at the Science for Life Laboratory in Stockholm, for his work on super-resolution microscopy.
“The award means very much to me since it confirms that I am a good scientist. Actually, I am the leading person doing this in Sweden,” says Dr Blom.

Technical advancements in microscopy are driven by the need of biomedical research to study cells and proteins down to the molecular level. This has led to the development of super-resolution microscopy, which produces images with resolutions of down to twenty or so nanometers. The technique is being used today at SciLifeLab, where Dr Blom is an application expert with responsibility for several super-resolution microscopes that are all special forms of fluorescence microscopes. His research group “Advanced Light Microscopy” was started in 2011 and works with the development of super sensitive microscopes. Super-resolution microscopy is a high-tech specialized form of fluorescence microscopy where labeling techniques and optics are combined to give images with a resolution of some ten nanometers of protein-localization and their interactions in the cell.
“Normally when you use classic microscopy techniques, you would get a resolution of down to 250 nanometers. But with some optical tricks you can come down as much as to tens of nanometers instead. Previously scientists looked at everything at the same time. This resulted in a blurry image. The novelty is all about optically separating things in time and space to create better resolution.” 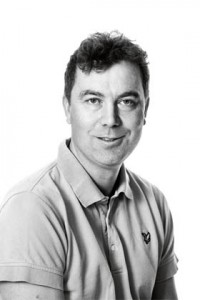 Hans’ interest and fascination for learning more about the unknown would have taken a slightly different turn had he continued with his other big passion, astronomy, as a young boy.
“I have always been curious and have enjoyed trying to solve problems. Here you have the possibility of seeing what nobody else has seen before. In astronomy you look at something at an enormous distance. Your object thus becomes very small and hard to resolve, which is the same basic principle and problem as in microscopy.”

However, during his university education he soon found himself more drawn towards microscopy and optics and decided to remain here on earth. He learned the techniques of super-resolution microscopy and built instruments on his own in Germany, in the group of Prof. Stefan W Hell. After a few years he returned to Sweden and was assigned the mission of building up a department focused on super-resolution microscopy at KTH headed by Prof. Jerker Widengren. Hans Blom has worked full-time for the last two years on developing the new national super-resolution laboratory at SciLifeLab, where scientists can be educated in microscopy and obtain much better images, in order to see things that they have never seen before. Hans Blom and his team, in part specialized in STED (Stimulated Emission Depletion microscopy), an optical super-resolution technique that by selectively deactivating fluorescent molecules by stimulated emission, enhances resolution and supports scientists imaging projects. Compared with other super-resolution techniques that are also applied and supported in the laboratory (e.g. SIM, PALM, dSTORM), the beauty of STED and its unique feature is that it is a purely optical method that does not require any mathematical image processing.

“With STED it is all about separating the proteins labeled with substances that can emit light. You turn off whatever you don’t want to see in the image. Sort of like if everybody in a big group screams at the same time you can’t hear a thing. But if almost all of them are quiet, all of a sudden you’ll be able to hear the single voices that are left,” says Hans Blom. This is the basic principle behind all optical super-resolution microscopy techniques.
“For the last fifteen years the super-resolution field has grown, and more commercial instruments have been developed. With super-resolution microscopy you can resolve up to ten times as much as you can with regular microscopes. You can look at pretty much any type of cell, and even examine living systems.”

But the complexity of the technology requires knowledge, Dr Blom emphazises.
“You can press a button and get results. The tricky part is to be able to interpret the results. So even if the technology is getting better, scientists need to have the knowledge to allow them to understand what they are actually seeing. Analyzing the information in a meaningful way is important, as we are now starting to see things previously unseen. Asking the right questions suitable for the technique is thus very important. The most crucial thing, as always, is to make the perfect sample and not to distort the reality too much. One thing I am sure that Lennart Nilsson worked hard on while taking his images.”

For his diligent work in developing STED microscopy Hans Blom has now received the Lennart Nilsson award of SEK 100,000, which he will use for studying and evaluating other complementing and emerging super-resolution techniques, such as nanoSIMS and 3D-STORM at Harvard University, Boston USA. NanoSIMS is a form of mass spectrometry imaging tool. The NanoSIMS (Seconday Ion Mass Spectrometer) creates nanoscale maps of elemental composition, combining the high mass resolution, isotopic identification, and subparts-per-million sensitivity of conventional SIMS with spatial resolution down to 50 nm and the identification of up to seven masses in parallel from the same nanoscale volume. Researchers at Harvard University have recently shown how this can be used on a nanometre scale to image and measure protein synthesis, localize active RNA and relate this to the function of cells and tissue.

3D-STORM, a form of optical microscopy similar to the already established PALM technique currently in use at the Science for Life Laboratory, employs photoswitchable fluorescent probes to facilitate single molecule localization in a sample with a high density of labeling in all dimensions. The imaging process consists of many cycles during which fluorescent molecules are activated, imaged, and deactivated. In each cycle only a subset of the fluorescent labels are switched on, such that each of the active molecules are optically resolvable from the rest. This allows the position of these fluorescent molecules to be determined with nanometer precision. Over the course of many such cycles, the positions of numerous fluorescent molecules are determined and used to construct a super-resolution image.
“These new microscopy techniques have an extremely high 3-dimensional resolution, which makes them very attractive to us,” says Dr Blom. “It would mean a great deal to medical research in Sweden if we could one day have them here at SciLifeLab, thus complementing our other techniques.”

When it comes to the future evolution of super-resolution microscopy, Hans Blom believes it will be within three areas.
“One is the sample side, where there will be a development of fluorescent molecules and tricks to control these better, and make them better. It doesn’t matter that you have the possibility of acquiring fantastic imagery if the sample isn’t of a superb quality. Another area is the instrumentation itself. The microscopes will become a little bit more advanced and it will probably be easier to measure several colors and dimensions. The third is the analytical side. With this new sharp image it will be even more crucial to ask the question – what is the meaning of what I’m seeing? And have we evaluated it properly in order to make the right analysis? As seeing is believing one actually needs to be an expert in all these fields to know for sure that our new eyes do not deceive us, which optical illusions easily show. The whole super-resolution community, together with several commercial companies, is however working hard in all these areas, so the future looks bright for resolving things even better.”

The Center for Medical Image Science and Visualization (CMIV) will participate in an European collaboration for artificial intelligence in digital pathology. The project has received financing from the Innovative Medicines Initiative, a public-private partnership under the EU research and innovation programme, Horizon 2020, reports Linköping University. CMIV has a leading…

3D images of sperms binding to the egg surface

Researchers at Karolinska Institutet have obtained the first 3D snapshots of a sperm protein attached to a complementary egg coat protein at the beginning of fertilisation. The study, which reveals a common egg protein architecture that is involved in the interaction with sperm in both mollusc and mammal, is published…

The best in life science imaging

Olympus has unveiled the winners of their second Global Image of the Year Life Science Light Microscopy Award, an annual competition that recognizes the best in life science imaging. The contest launched on Sept. 15, 2020 with a call for users to submit their best life science microscopy images through…