The fight against cancer

Here’s a sample of some of the latest Nordic medtech and pharma progress in cancer treatments.

Cancer is perhaps the hottest area within pharmaceutical research in the world right now. According to the U.S. pharmaceutical industry association PhRMA, there are nearly 1,000 new substances being developed in commercial clinical cancer research run by pharmaceutical companies. An example of this comes from Swedish biotech company Aprea, part of the Karolinska Development portfolio. The company recently presented preclinical data on their lead candidate, APR-246, a new compound that reactivates non-functional tumor suppressor protein p53. APR-246 has demonstrated unique pharmacological properties compared to conventional chemotherapy, by being effective even in cancer cells with p53 mutations and by preferentially targeting tumor cells over normal cells. In the new studies, the anticancer effect of APR-246 on ovarian cancer cells has been tested. The results show that APR-246 acts synergistically with platinum compounds to reverse cisplatin-sensitivity to cisplatin-resistant p53 mutant ovarian cancer cells.

Three areas of biology that are synergetic

“Most of our research is concentrated on five main cancer types – breast, gastrointestinal, hematological, lung and urological cancers – but there are other rarer forms of cancer with high unmet medical needs that we also want to address. We have seen a lot of promising results related to so-called targeted therapies, one of the reasons for why we are today observing improvements in cancer survival rates. In the past drug development was often focused on those cancers with large patient populations, without a clear appreciation of how different tumors can be at the molecular level. Now, in a patient-driven strategy, our new drug targets, preclinical disease models and, ultimately, the design of our clinical trials are all driven by a molecular understanding of our patients, to identify who will be more likely to respond to a given treatment. Investigating the molecular pathways that can help us characterize and classify patients’ tumors is an important focus of our research. Development of good biomarkers (molecular indicators within the body) will also help to effectively measure the progress of disease or the effects of treatment. By building on this knowledge we can develop new agents and investigate their combination with other novel or existing cancer therapies.” 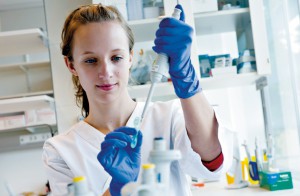 Norway has seen some highlights this past year within the development of cancer treatments. Oslo Cancer Cluster reached a record high in 2012 – from 29 in 2011 to 60 cancer studies initiated (industry and investigator initiated included).
“Between 2011 and 2012 clinical research within the cancer area has doubled. Several of our member companies have been given approval to launch new studies. We are also setting up a brand new cancer cluster innovation park, which we hope will create an interest in diagnostics and treatments,” says Susanne Werner, head of communications for Oslo Cancer Cluster.

A few examples include Oslo Cancer Cluster members Nordic Nanovector, Targovax and Ultimovacs, three startups ready for clinical phase I. Nordic Nanovector is developing anticancer radioimmunotherapeutics and has received approval from the Norwegian Medicines Agency to commence the company’s first clinical trial of Betalutin. This is a nanovector, i.e., a radionuclide conjugated to a tumor-seeking carrier/antibody which can be used for the irradiation of malignant metastasized tumors with minimal damage to nearby healthy normal tissue. The technology is intended forthe treatment of patients who suffer from hematologic cancer, in particular Non-Hodgkin Lymphoma (NHL). Targovax and Ultimovacs have now also obtained approval to start clinical trials to test their cancer drug or therapy on patients.

Targeting cancer spread to the bone

Another highlight from the Norwegian cancer area is from drug maker Algeta. Updated data from the pivotal phase III ALSYMPCA trial for its investigational drug Alpharadin (radium-223 dichloride) has confirmed the improvement in overall survival of Alpharadin used to treatmen with castration-resistant prostate cancer (CRPC) and symptomatic bone metastases. The new data showed that Alpharadin improved overall survival by 44%, resulting in a 30.5% reduction in the risk of death compared to placebo. “Bone metastases are one of the main causes of disability and death in patients with castration-resistant prostate cancer, yet until now there has been little progress made towards developing therapies that target the cancer when it has spread to the bone. Alpharadin is the first therapy specifically addressing cancer that has spread to the bone that has shown, in a phase III trial, significant improvement in overall survival,” said Dr. Chris Parker of The Royal Marsden NHS Foundation Trust, London, and The Institute of Cancer Research, London, and principal investigator of ALSYMPCA in a press release.

Medical technology is a vital part of the process of curing cancer, whether this involves radiation equipment, imaging or implants. These are some examples of the latest progres and recent research within Nordic medtech focused on cancer treatment.

In Norway, photodynamic technology company Photocure has had some positive outcomes recently with one of their products currently in the pipeline. Cevira is being investigated as a potential treatment of HPV and precancerous lesions of the cervix. The Cevira device contains a LED light source that in combination with a medicinal product initiates a photochemical reaction in exposed tissue. It combines the Cevira ointment with illumination by a red light source to treat HPV and cervical abnormalities. The Cevira ointment contains HAL (hexaminolevulinate) which is applied together with the light source to the cervix. The results in a phase IIb study of the drug-delivery device Cevira showed significant efficacy in the treatment of HPV and cervical pre-cancerous lesions. A 5% dose of Cevira demonstrated a statistically significant and sustained lesion response compared to placebo in patients with precancerous CIN2 lesions, 95% vs 62%, respectively, at six months. The product is in phase IIb development and is expected to enter phase III in 2013.

At the Department of Radiology, Copenhagen University Hospital, Herlev, there are various innovation initiatives at different developmental stages at the moment. In one initiative, researchers are piloting and carrying out the first clinical tests of a prototype for a breast cancer microwave camera, in collaboration the Technical University of Denmark. The theory and hope is that microwaves will physically and non-invasively permit the discrimination of healthy tissue from cancer cells.

Navigated Brain Stimulation (NBS) is a new, noninvasive technique for accurately and reliably determining the location of brain areas responsible for vital functions such as limb movement and speech production in the individual brain. NBS is based on transcranial magnetic stimulation and stereotactic navigation using the patient’s individual magnetic resonance imaging (MRI) dataset. NBS has been shown to be as accurate as the invasive mapping method used during neurosurgery, direct cortical stimulation. Because NBS is noninvasive, it can be used for planning, prior to any treatment decision.

In the Medtech West region, projects are underway to combine multimodal magnetic resonance imaging with novel multiparametric and multidimensional image analysis techniques. Methods are being developed to quantitatively characterize tissue morphology, microvasculature, microstructure, and metabolism from spatially aligned multimodal MR images, including anatomical T1 and T2-weighted images. The broad outcome from the project will be a collection of CAD tools for multimodal MRI that will permit more accurate detection and characterization of both breast and prostate cancers.

New global study of pharmaceutical contamination in the environment

A new study by an international consortium, including researchers from Stockholm University, looking at the presence of pharmaceuticals in the world’s rivers, found concentrations at potentially toxic levels in more than a quarter of the locations studied. The new study, published in Proceedings of the National Academy of Sciences, is…

Not only in the Nordic countries, but also in the rest of Europe, pharmaceutical companies are choosing to locate their R&D activities in emerging markets. What are the drug company strategies and what effect will the ongoing outsourcing trend have on the industry? China India, Russia, and South American countries…

”A combination of great science, great projects and great people”

BioArctic’s lead compound has the potential to become the first disease-modifying treatment for Alzheimer’s, and so far the company’s journey has involved FDA approvals, a successful deal with AbbVie, collaborations with universities – and not least, the hiring of a very dedicated CEO. For years the treatments for central nervous…