Professor Campbell has always been fascinated by parasites, he even paints their mouthparts as if they were flowers in a vase. He has also spent most of his life figuring out how to kill them, and improving health and wellbeing of millions of individuals.

Tiny and stealthy, roundworm parasites often go undetected in the human body until they have wreaked their havoc, robbing hosts of their health, sight, mobility and frequently their lives. People in some of the poorest and remotest places of the world are most vulnerable to parasitic-borne diseases, such as River Blindness and Lymphatic Filariasis, and up until a few decades ago, little was available to treat roundworm diseases in their early stages.

In the late 1970s, research by long-time parasite expert American Dr. William C. Campbell of Drew University and Satoshi Ōmura, a Japanese microbiologist who isolated natural products, yielded a new drug, Ivermectin, which killed roundworm larvae at a previously-hard to reach stage. Decades of doses have reduced cases of River Blindness and Lymphatic Filariasis in parts of sub-Saharan Africa, South Asia and Central and South America. The success of the drug earned Campbell and Ōmura half of the 2015 Nobel Prize in Physiology or Medicine.

“The importance of Ivermectin for improving the health and wellbeing of millions of individuals with River Blindness and Lymphatic Filariasis, primarily in the poorest regions of the world, is immeasurable,” according to a press release from the Nobel Prize Foundation. “Treatment is so successful that these diseases are on the verge of eradication, which would be a major feat in the medical history of humankind.”

The drug has been in production for more than 25 years, used in animals since 1981 and in humans since 1987, according to Campbell, and has done “tremendous things for animal and human health. The reason for the prize was not just the prospect of doing good, but actually doing good.”

In the case of River Blindness, the parasite’s presence in the body causes chronic damage to the cornea, leading to blindness. Lymphatic Filariasis afflicts more than 100 million people, according to the Nobel Prize Foundation, and can cause swollen limbs (elephantiasis) once the parasites settle in the bloodstream and lymph nodes.

“More than a billion doses have been given away to prevent River Blindness,” Campbell noted. “And it is used in combination with other drugs to prevent Elephantiasis, a disease of the lymph nodes.”

Campbell’s Nobel Prize capped a career studying parasites. “I have always found them fascinating,” he noted. “I heard about them in high school. I met Desmond Smyth, a professor at Trinity College in Dublin, and parasites were his area of expertise. He became my mentor and the interest in parasites carried over.”

He found that parasites had complicated life cycles, and was interested in the idea of treating animals to get rid of diseases caused by parasites.

“So I like parasites, but have no problem trying to cure the diseases they cause.”

Campbell focused on killing the parasites at a stage that had been out of the reach of conventional drugs. “I was preoccupied with it for about 15 years; I did different things, at times doing hands-on research, other times writing, administering other things.”

A breakthrough in research came when Campbell learned that one of Ōmura’s Streptomyces cultures was very effective in eliminating parasites and the active compound, Avermectin, was purified. Avermectin was further modified to Ivermectin, according to the Nobel Prize Foundation.

Now retired, Campbell lectures to honors biology students at Drew University about parasites and his career and attends conferences. He also has merged his interests in art and science, painting expressionistic pictures of parasites, which he sells at auctions. The proceeds go to a fund to pay for students to attend the annual conference of the American Society of Parasitologists.

Campbell also is able to enjoy the continued success of Ivermectin. The drug has proven effective against other parasites besides roundworms, is readily available and has shown few side effects. 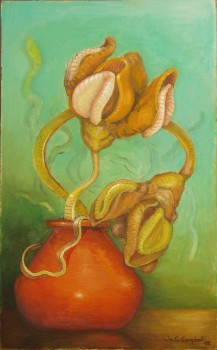 Photo of Campbell at chair signing during the Nobel week 2015: Claudio Bresciani, TT

Winning the Nobel Prize in chemistry generates a flood of phone calls, emails and invitations, which really was not a surprise to Sir. Fraser Stoddart, PhD, one of a trio of chemists who took the 2016 honors. What Stoddart did find most surprising and gratifying was among all the well-wishes…

The 2009 Nobel Prize in Chemistry was awarded to three scientists for mapping the ribosome at the atomic level. The pioneering work was performed by the Israeli crystallographer Ada Yonath, who dedicatedly and persistently continued to reveal the large and complex ribosome structure at a time when many believed it…

For Nobel Prize Winner Paul Modrich science is about using inner creativity and seeing an idea transform step by step into new exciting discoveries. A curiosity and love for problem-solving research that has given us groundbreaking knowledge about human DNA. The camera flashes were the only thing that was heard…