In the early 1980s, a new medical syndrome mainly affecting healthy young men was discovered and described. Their symptoms, such as unusual infections and forms of cancer, were life-threatening and associated with a rapid elimination of CD4+ T cells and antigen presenting cells. The disease was named Acquired Immune Deficiency Syndrome (AIDS) and in 1982, it was concluded that the disease had spread globally.

Researchers began looking for causative agents and only a year after the identification of the disease, at Institut Pasteur in Paris, Françoise Barré-Sinoussi and Luc Montagnier were able to isolate and characterize the virus causing it. For this accomplishment, they were awarded the Nobel Prize in Physiology or Medicine 2008. They shared the Prize with Harald zur Hausen, who discovered the human papilloma virus, which causes cervical cancer. The setting in Stockholm was very different from where she was when she got the news of the Nobel Prize.

“I was in Cambodia coordinating a clinical trial in tuberculosis and HIV, and I really did not expect to get the Prize at all. I was really surprised,” says Barré-Sinoussi when I speak to her on the phone. “The visit to Stockholm was really magical. I felt like I was in another world.”

Françoise Barré-Sinoussi first became interested in virology and retroviruses in particular in 1971. She was at the end of her studies and had started working as a volunteer in a research lab at Institut Pasteur in Paris.

“It was a part-time job but I spent most of my daytime there, and I had to study for my exams in the evenings and at weekends,” she says.

“When oncogenes were discovered, many researchers switched to studying these instead, and left the retrovirus behind. But at Institut Pasteur we continued to study retroviruses and the relationships between cancer and retroviruses.”

In December 1982, Françoise Barré-Sinoussi and her co-workers at the Viral Oncology Unit at Institut Pasteur were asked to study HIV by clinicians from the AP-HP. They started looking at a lymph node biopsy from a patient diagnosed with “general lymphadenopathy”,  the pre-AIDS state of the disease, before profound immunodeficiency. A few months later they were able to isolate the virus and published their first description of it, which they called at that time LAV (Lymphadenopathy Associated Virus) in the journal Science. The virus’s morphological, biochemical and immunological properties were determined and it was characterized as the first known human lentivirus. The idea of searching for the virus in swollen lymph nodes instead of blood proved to be correct, since we know today that lymph nodes are the main sites where the virus hides during the presymptomatic phase.

A mixture of luck and the right expertise

“Thanks to close collaborations with clinicians, we were able to isolate the virus. It was a mixture of luck and the right expertise,” says Barré-Sinoussi.

Another factor behind the isolation that she mentions is the development of culture technology. Researchers working with breast cancer and retroviruses at Institut Pasteur had been able to culture T-lymphocytes for a long enough period to detect putative latent retroviruses and to set up a protocol for this. “The discovery and availability of growth factors, like the T-cell growth factor, interleukin-2, also contributed to our being able to isolate the virus,” says Barré-Sinoussi.

Soon after the isolation, the genome sequence of the virus was mapped and this eventually led to the first diagnostic test and opened the way for the design of specific drugs and vaccines.

“A wonderful recognition not only of my work, but for everyone involved in fighting AIDS.”

“Receiving the Nobel Prize is a wonderful recognition not only of my work, but for everyone involved in fighting AIDS: researchers, the community and all HIV- infected people all over the world,” says Barré-Sinoussi.

When I ask what the Prize means to her privately, she says she cannot separate her work from her private life. “My private life is related to my work,” she says and laughs.

Fighting the virus and the disease

Françoise Barré-Sinoussi was at the time of this interview [2008/2009] a Professor at Institut Pasteur and Director of the Regulation of Retroviral Infections Division at Institut Pasteur. She has been President of the Scientific Council of the ANRS and has directed the research site ANRS in Southeast Asia. She has initiated and established collaborations with the countries most affected by HIV/AIDS, in particular through the Institut Pasteur International Network, where she has managed multidisciplinary networks and programs. She has also worked at an international level, notably as a consultant to the WHO and UNAIDS-HIV. By combining basic and clinical research, she has contributed to achieving concrete improvements in prevention, clinical research and treatment.

“I think it is important that we strengthen and educate the health systems in the countries where the epidemic is worst.”

“Although the situation is still terrible in many parts of the world, we have made progress. For example, I think it is important that we strengthen and educate the health systems in the countries where the epidemic is worst. This is a critical issue and has to be done in place in the country. It is also important that all patients are followed up and evaluated carefully,” says Barré-Sinoussi. 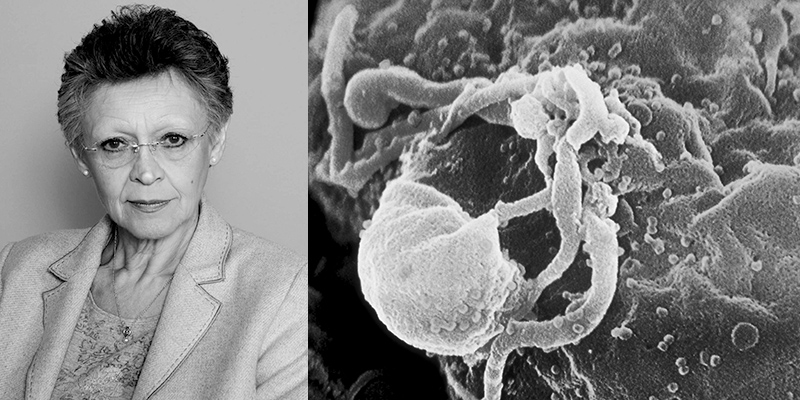 Today, anti retroviral drugs may keep AIDS under control for many years and it has become, in the developed countries at least, more of a chronic disease than a lethal disease. However, the drugs are very expensive, and only available for some people and do not stop the disease completely. So a vaccine is very much needed and would be welcomed. However, there is nothing in sight at the moment.

“But I think there is still hope of finding a vaccine. A new concept in immunology might be needed. Therapeutic vaccines are more promising,” says Barré-Sinoussi.

She and her colleagues were in 2009 focusing on the mechanisms of host control of HIV infection for example, both at the cell level and the level of the immune response. They studied how the virus is transmitted from mother to child and different examples of natural protection against infection, such as individuals exposed to HIV but who remain uninfected. Animal models of non-pathogenic infection (African Green Monkey, AGM/SIVagm) has also been used for investigating the role of host factor protection.

“You also have to be committed and be motivated to make a contribution to helping the world.”

“For a young researcher today, I think it is important to think in multidisciplinary way and networking has become a very important factor. You also have to be committed and be motivated to make a contribution to helping the world,” she says.

This interview was originally published in Nordic Life Science Review, No 01 2009 and has been slightly updated.