Gitte Pedersen: “Invent and invest in positive change for the future”

An adventurous spirit rooted in a Viking heritage and her parents’ as an example helped spur Gitte Pedersen to move from her native Denmark to the U.S. 20 years ago, where she helped create a company and made a home.

CEO and co-founder of Genomic Expression in Massachusetts, USA, Gitte Pedersen also credits her mother and father for inspiring her to explore and invent.

“My parents spent ten years in Brazil,” she says. “I have family members in the USA who came over here by boat a very long time ago. I also did my engineering internship in India for Ciba Geigy, now Novartis. I wanted to experience the world and I did not just want to visit. I wanted to understand the people and the cultures.”

What it means to run a business

Gitte’s mother was an entrepreneur and a politician. Her father was the first engineer in the family and he was also an entrepreneur. He took over his father’s business wiring parts of Denmark for electricity when electricity was a new technology. “So it was in my upbringing that I saw and understood what it meant to run a business,” says Gitte.

“So it was in my upbringing that I saw and understood what it meant to run a business.”

Throughout her career she has also been, and is, inspired by several high-powered executives.

“I had the pleasure of meeting Richard Branson at Necker Island when we got into the finals of the Extreme Technology Competition,” says Pedersen. “At that point I had already read his books. He is such an amazing supporter of entrepreneurs and he is also a lot of fun. I also admire Bill and Melinda Gates, Bill for how he built Microsoft and Melinda for her pioneering philanthropy providing healthcare for third-world countries – the latter now more important than ever with the COVID-19 pandemic. And finally Jeff Bezos for making Amazon the largest online market place in the world.”

Read more: Rafael Natanek: “It has been encouraging to observe the growth in the European life science landscape”

Gitte, who holds a Master’s Degree in Chemical Engineering, worked at Novo Nordisk in a number of positions, from R&D to Marketing, before she founded Proximity Ventures, an advisory firm that assisted biotech companies in Scandinavia enter the US market as well as assisting the Danish Ministry of Foreign Affairs to attract investments into the Danish Biotech industry. In 2015 she started Genomic Expression, together with her brother, Morten Pedersen. The company raised money to establish an independent lab in Boston.

While getting Genomic Expression off the ground was challenging, the company has made its mark analyzing RNA to detect diseases, monitor health and design treatments, with a focus on cancer patients. This development allowed the company to jump into the COVID-19 testing market at a critical time, according to Gitte. 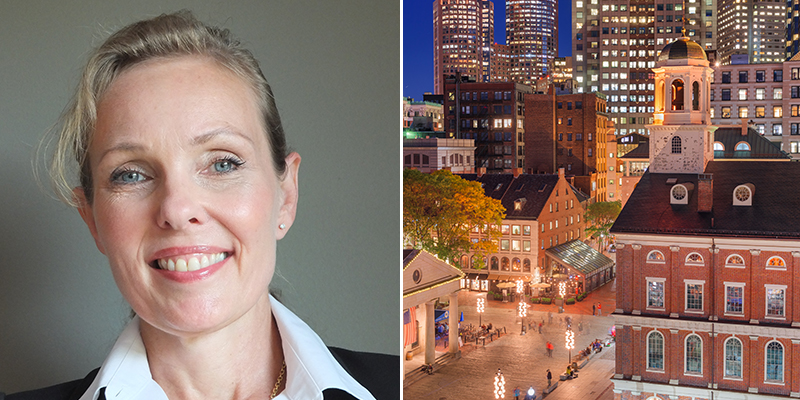 “I raised 6.5 million USD in grants, and moved an idea to a product and a launch,” she says. “We invented a new technology and a new business model and during COVID-19 pivoted from being a research and development company to a fully commercial diagnostic company with multiple products in the market and recurring customers.”

Its RNA research helped the company develop more efficient tests for the virus. “We have proven we can use our unique chemistry to pool many samples, which could further reduce cost. Finally, we signed a licensing agreement with Yale University to move the test into saliva, which enables self-testing that reduces risk to healthcare providers and individuals,” Gitte says.

Her other major challenge, she says, was having two children while working in the USA, without maternity leave. “That was hard. But I managed by hiring help and working part-time for a while.”

Gitte has found more similarities than differences when it comes to working in the two nations of Denmark and the USA.

“It’s the differences that we often focus on,” she says. “I also believe that diversified teams are superior to teams that bring the same background to the table, both when it comes to gender and to culture. It’s when the ‘truth’ you live by is challenged that you grow the most. It is also the hardest.”

“It’s much more empowering. In Denmark, I got a project and set up meetings. I was constantly stimulated at Novo Nordisk. In the USA, my manager wanted me to check in on a weekly basis and I had to explain what I was doing. It was something I had to get used to.”

Looking back at her career, Gitte reflects that Denmark has a more “hands-off” work culture, which she enjoyed. “It’s much more empowering. In Denmark, I got a project and set up meetings. I was constantly stimulated at Novo Nordisk. In the USA, my manager wanted me to check in on a weekly basis and I had to explain what I was doing. It was something I had to get used to,” she describes.

“People are also less territorial about jobs in Denmark. In the USA I got reprimanded for working on someone else’s problem, but she was on vacation and we were running out of the product, I thought it was important to fix it and my customers depended on it,” Gitte adds.

The Nordic countries’ life science industry benefits from a cost-effective healthcare system that takes care of people and has numerous successful companies and people thanks to, for example, the Medicon Valley region. “We have a culture of innovation and business with a business culture that capitalizes on innovation,” says Gitte.

“We don’t invest enough money to pivot internationally – that is a European thing, not just a Nordic thing. And it’s difficult to be a small company and sell into the Danish healthcare system. We are fundamentally not risk-takers.”

But growth is hampered by limited funding. “We don’t invest enough money to pivot internationally – that is a European thing, not just a Nordic thing,” she adds. “And it’s difficult to be a small company and sell into the Danish healthcare system. We are fundamentally not risk-takers.”

“We still live in a male-dominated world”

Neither the USA nor Denmark, she adds, are doing enough to grow female executives. “I started my own company because there is no glass ceiling in a house you build yourself,” Gitte notes.

“I started my own company because there is no glass ceiling in a house you build yourself.”

“We still live in a male-dominated world where women are discounted and measured using a different metric than men. There is not an active effort in most large corporations to change the status quo and there is a complete lack of acknowledgement that it’s a problem. I loved my time at Novo Nordisk, however, at my job interview I was asked about my reproductive plans – I almost walked out and I got into an argument with the interviewing director. I did not think I would get the job and was surprised when they called me.” 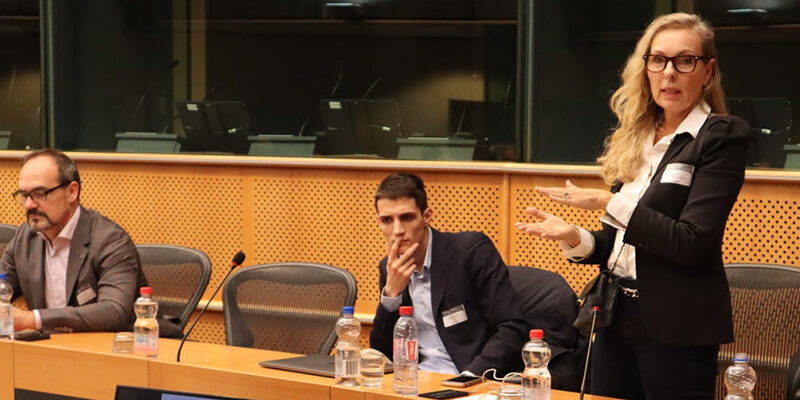 Gitte Pedersen presenting at the European Parliament EUTop50 in 2018

“I also had a job assessment meeting where my boss patted me on the hand and suggested that I find a ‘rich’ man, get married and have children. These experiences simply reflect that women are not perceived as management material and are not groomed for it because they have children. Your job becomes a dead end. That was back in 1997. I saw a lot of very talented women’s careers stall in the process and it is one of the reasons I left. A bunch of other women left too.”

COVID-19 has fundamentally changed the timelines

The pandemic spurred rapid growth in the life science and medical fields and Gitte predicts future increase in the speed of innovation to deliver effective treatments. She advises other Nordic life science entrepreneurs to invent and invest in positive change for the future.

“What we experienced during COVID-19 has fundamentally changed the timelines, but also enabled delivery of care using technology such as Telehealth and at-home diagnostics.”

“We are going to see faster improvements in healthcare over the next couple of years than we ever imagined,” she says. “Speed means we need to invest more money earlier, so this slow drip of 5 million USD here and another 10 million USD there won’t work In the USA we see a trend of 100 million USD series A. It’s okay to fail faster – some will succeed. Healthcare has been this monster that moved so slowly. If you got diagnosed with cancer today, you would die before a new drug could be approved, but that is about to change with the new mRNA vaccine and therapeutics. What we experienced during COVID-19 has fundamentally changed the timelines, but also enabled delivery of care using technology such as Telehealth and at-home diagnostics. We abbreviated the time from symptom to diagnosis from weeks to fewer than 24 hours and we can deliver that without the patient leaving his or her bed.”

“We are revolutionizing healthcare and life science. It is exciting!”

Genomic Expression is ready and eager to be part of this expansion. “I am in the process of attracting key people to the team and raising growth capital to expand internationally,” Gitte says. “We are pioneering RNA sequencing as a platform for next generation cures. We are revolutionizing healthcare and life science. It is exciting!”

Remaining at the forefront

Jan-Olof Jacke, AstraZeneca AB’s new CEO, on maintaining the company’s position in Sweden. Keeping AstraZeneca AB in the forefront – as a research and marketing leader, a key component of Sweden’s domestic economy and export business and as a contributor to AstraZeneca’s overall growth – are priorities that AstraZeneca AB’s…