William Kaelin feels he has been fortunate in his scientific career. His contributions have had a great impact, not least within cancer treatment, and for future generations he emphasizes the importance of supporting basic science.

Identifying a tumor’s distress call for oxygen, and knowing how to shut down its supply, can help thwart cancer and aid the development of cancer-fighting drugs, according to work by William G. Kaelin Jr. MD. Kaelin won the 2019 Nobel Prize in Physiology or Medicine for his work on how cells sense and adapt to the availability of oxygen. His research has shed light on the effects of mutations in tumor-suppressor genes in the emergence of cancer. He is a Howard Hughes Medical Institute Investigator and the Sidney Farber Professor of Medicine at Dana-Farber Cancer Institute and Brigham and Women’s Hospital, Harvard Medical School. Co-winners in the same category were Peter J. Ratcliffe from the University of Oxford and the Francis Crick Institute, and Gregg L. Semenza from the Johns Hopkins University School of Medicine. They were all involved in similar work.

The early hour of the award phone call and the excitement it generated gave the event a dreamlike quality, Kaelin says.

“I’ve used the word surreal because it does feel surreal in that moment,” Kaelin told Nordic Life Science. “I was also half-asleep,” he joked. “But I think every scientist dreams this might happen, but it is so improbable, you think it won’t happen. I remember being flooded with a sense of gratitude. I have been so fortunate in my scientific career and I have had such wonderfully supportive family, friends, trainees and colleagues – and also some luck in science in that the mechanism we discovered turned out to be beautiful and prize-worthy.”

“Collaboration goes on all the time – but too much collaboration can be bad. If everyone goes in the same direction they could all go off a cliff. It’s better to follow your own nose and go in the direction you feel is right.”

While he and Semenza worked in similar areas, they did not collaborate; Kaelin calls them friendly competitors.

“It’s a fallacy that if scientists collaborated more, progress would come faster,” Kaelin states. “Collaboration goes on all the time – but too much collaboration can be bad. If everyone goes in the same direction they could all go off a cliff. It’s better to follow your own nose and go in the direction you feel is right.” 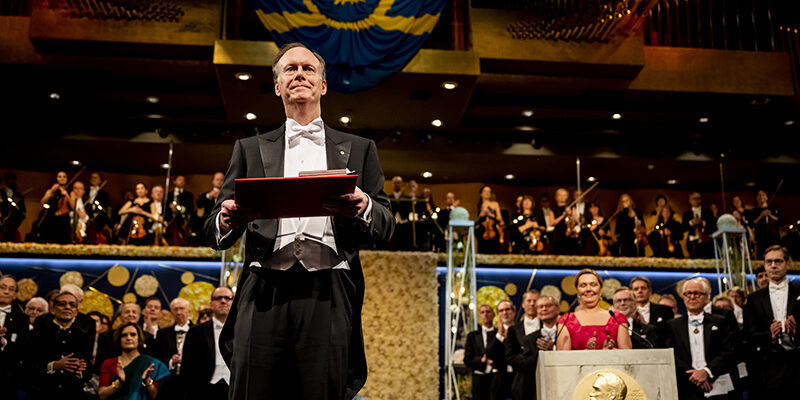 Studies of tumor blood flow and how cells adjust to oxygen levels are critical to developing cancer treatments that can literally suffocate tumors. Most, if not all, cancers need to obtain an oxygen delivery system, notes Kaelin.

“Once we understood the oxygen-sensing pathway, we could develop drugs that worked on specific nodes of the pathway. Now we can make drugs that block the pathway or enhance the pathway, decreasing or increasing oxygen delivery, depending on the disease to be treated.”

The completion of the human genome project in 2003 and recent improvements in DNA sequencing have allowed researchers to look at tumors to determine which genes have been altered. That inspired the creation of drugs that are the best fit for a specific mutation.

“More of these drugs are being developed and now we can start to use them in combination, because there is always a chance one cell is resistant to any single treatment,” explains Kaelin. “We can directly kill cancer cells based on their genetic makeup. We are also treating cancer with drugs that rev up the immune system.”

First introduced to this research topic when he was a third-year medical student at Duke University, Kaelin studied tumor blood flow and tumor angiogenesis. During his clinical training he learned more about cancer as a clinical entity and the clinical aspects of the disease. Kaelin briefly practiced medicine after becoming board certified in medical oncology in the late 1990s, before feeling the pull towards full-time research.

“As I started seeing patients it became clear that we had inadequate treatments for cancer, and we needed a better understanding of the molecular aspects of cancer,” he explains.

“The reason I am a scientist”

Kaelin began his studies as a medical oncology fellow with David M. Livingston, MD at Dana-Farber Cancer Institute in 1988.

“David Livingston is the reason I am a scientist today,” Kaelin adds. Work with the retinoblastoma (RB1) gene gave Kaelin the tools to study other tumor suppressor genes. “By the time I became a clinical fellow in the 1980s, it was becoming clear that modern molecular biology was the way to study cancer,” he says.

“I did so with some skepticism that I actually could do it, however. I started working at David Livingston’s lab, and I said I would do it until it was not fun, or I was not making meaningful contributions. It has now been 30 years!”

A beautiful tribute to nature

Later starting his own laboratory, Kaelin studied von Hippel-Lindau disease, a hereditary disorder caused by anomalies of the VHL gene, which, like the RB1 gene, is a tumor suppressor gene. Patients with von Hippel-Lindau disease develop benign and malignant tumors in multiple organs, beginning in early adulthood, according to information from Dana-Farber. What he observed was that the VHL protein normally helps regulate the levels of an oxygen-sensitive protein called HIF. HIF can trigger the production of red blood cells and new blood vessels. Cancer cells with mutated VHL genes seize control of this system to order the construction of new blood vessels to feed their growth, according to Dana-Farber.

“Most scientists are happy puzzle-solvers. In this particular case when I solved the puzzle, it struck me as a beautiful and elegant tribute to nature.”

One of the reasons Kaelin studied the VHL gene is that mutations of this gene are also important in some non-hereditary cancers. Here the mutations are not inherited from a parent but are acquired after birth.

“I started looking at hereditary, then non-hereditary cancers, such as kidney cancer,” he says. “I used the VHL cancer as a Rosetta Stone to understand how kidney cancer operates. I wanted to help put together a combination of treatments that cured kidney cancer. Also, now that I understand oxygen-sensing pathways, I’m looking at these pathways in diseases such as heart attack and stroke, where oxygen delivery is impaired.”

“Most scientists are happy puzzle-solvers,” he adds. “In this particular case when I solved the puzzle, it struck me as a beautiful and elegant tribute to nature.”

Kaelin’s work has inspired others as well. Peppi Karppinen (publishing name P. Koivunen), MD, PhD, and Dean and Professor of Medical Biochemistry at the University of Oulu in Finland, began collaborating with Kaelin in 2006 and in 2007-2008 was a senior research fellow in his lab at Dana-Farber. They have continued their collaboration and in January published their latest joint article with shared corresponding authorship in Science. The two are now working with another colleague on a review article.

“Dr. Kaelin is a very intelligent person and an excellent scientist,” Koivunen says. “He is very demanding, but also fair and supportive. He has wide knowledge beyond science and is a world traveler.”

Koivunen credited Kaelin for passing on lessons about conducting research and oneself. “I learned about the careful design of experiments and control experiments and how to prove your point in several ways,” she says. “He is a master in argumentation, as in what conclusions can be drawn from your data and what not.”

Don’t forget the importance of science

Kaelin’s inspiration for his own work came from growing up in the science-rich atmosphere in the U.S. in the 1960s, with the space program working at full throttle and competition with the Soviet Union on everyone’s mind.

“It was a good time for science and engineering in the U.S.,” he says. “Science and engineering were celebrated and it had a profound impact on my scientific career. I had a lot of science-related toys. I had a scientist visit my school in the fifth grade and my high school had strong teachers in mathematics and science.”

“I worry we’ve gotten away from the celebration of science. When I was young, supporting research was bipartisan – expanding knowledge was a gift we gave to ourselves and to future generations.”

He also attended a summer program at Florida Atlantic University for students gifted in mathematics and computer science, and joked, “I was surrounded by a lot of people smarter than me.”

A shift in attitudes towards science in the U.S., particularly in the past decade, concerns him, and Kaelin would like to replace the growing suspicion and skepticism towards science with the embrace of decades before.

“I worry we’ve gotten away from the celebration of science. When I was young, supporting research was bipartisan – expanding knowledge was a gift we gave to ourselves and to future generations,” he says. “Now increasingly funding gets tied to impact, but when doing basic science, we can’t always say what the deliverables will be. I hope we don’t forget the importance of basic science.”

“I hate to think 11-and 12-year-olds would not pursue a career in science and engineering because we are no longer perceived in some corners as the good guys.”

In the past the U.S. has benefited from having many of the world’s best and brightest come to work there, but now those scientists can be discouraged by anti-immigration rhetoric coming from Washington, Kaelin says. Kaelin also worries when politicians attack scientists whose findings don’t align with their political agendas, such as during the climate change debate. He believes this can discourage people from going into science. “It’s a dangerous and unintended consequence of anti-elitism,” he states.

He is awarded the Prize for Research in Medical Education

Glenn Regehr is awarded the 2020 Karolinska Institutet Prize for Research in Medical Education (KIPRIME) Dr. Regehr of University of British Columbia, Vancouver (UBC), whose work has improved the educational and scholarly practices in health professions education, will be the tenth winner of this award. His research looks broadly at…

Emmanuelle Charpentier is group leader at MIMS and guest professor at Umeå Centre for Microbial Research at Umeå University. She and the other laureate Jennifer Doudna, from the University of California, Berkeley, are recognized for their work demonstrating that Cas9 – an enzyme specialized for cutting DNA – can be…