The World Economic Forum has selected the company as one of the 2021 Technology Pioneers.

“We are extremely honored to be acknowledged by such a globally respected organisation,” says Karim Engelmark Cassimjee, CEO and co-founder of EnginZyme. “Our team is committed to solving one of the fundamental challenges of our time – how to produce chemicals, foods, materials and other products that modern society relies on, in a truly sustainable way. To be acknowledged as a Technology Pioneer confirms the uniqueness of our technology and its potential to play a key role in tackling climate change. We are very excited to become a part of this community and look forward to contributing to the Forum dialogues on this challenge.”

The World Economic Forum recognizes a limited number of companies each year as Technology Pioneers involved in new technologies and innovations that are poised to significantly impact business and society.

The Forum incorporates them into its network, aiming to give next-generation innovators a voice in solving global issues and enables them to contribute their ideas in multi-stakeholder meetings. Companies selected in the past include Airbnb, Dropbox, Google and Twitter, as well as Swedish companies Spotify, Tobii Technology and iZettle.

The chemistry industry has a central role to play in the mitigation of climate change, before 2050 it needs to cut its own emissions by half, while at the same time quadrupling production to meet the needs of the world’s growing population. EnginZyme has developed a cell-free synthetic biology platform that can provide R&D services to companies in multiple industries, including the pharma industry. The technology platform combines the breadth and power of nature (enzymatic cascades) with the efficiency of the chemical industry (packed bed reactors) in a best-of-both-worlds technical solution, the company states.

“When it comes to the pharma industry, for active pharmaceutical substances there are many advantages with our technology.”

“When it comes to the pharma industry, for active pharmaceutical substances there are many advantages with our technology. For example, pharmaceuticals are often complex molecules that demand an advanced synthesis in several steps, which produces a lot of waste. But by using enzymes in combination with flow chemistry (our technology) there are less steps, the amount of waste is decreased and the manufacturing process becomes simpler, cheaper and more environmentally friendly,” describes Dr. Karim Engelmark Cassimjee, CEO and co-founder of EnginZyme to Nordic Life Science. 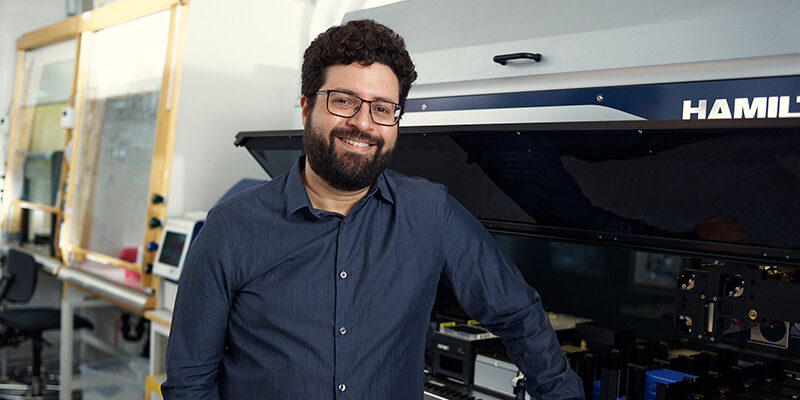 The long-term aim is to make its cell-free synbio platform the foundation upon which the future chemical industry rests.

“It has long been recognized that if we could effectively access nature’s full palette of molecules, we could solve many of the world’s most pressing problems,” says Engelmark Cassimjee. “There’s just so much more you can do with biological systems than with traditional catalysts and petroleum-based building blocks. But the key word here is ‘effectively’ — it needs to be as cheap and easy to scale as the chemical solutions we’ve used for more than a century now. We’re the first company to truly address that and by doing so we are building foundational technology for an entire future industry.”

“There’s just so much more you can do with biological systems than with traditional catalysts and petroleum-based building blocks.”

Within five years he sees his company as the leading company within synthetic biology, with a number of implemented manufacturing processes for products in several different market segments.

Synthetic biology is the design and construction of new biological parts, devices, and systems, and the re-design of existing, natural biological systems for useful purpose (Nature). The field is hot, with many investors and entrepreneurs making comparisons to the dawn of the computer age, states EnginZyme.

This is reflected in the almost $4 billion invested in it in 2018 (up 8x from 2014) and in the Chemistry Nobel Prize awarded to Processor Frances Arnold in the same year for her work on enzymes.

As a Technology Pioneer, EnginZyme’s representative Karim Engelmark Cassimjee will be invited to participate in World Economic Forum activities, events and discussions throughout the year. EnginZyme will also contribute to Forum initiatives over the next two years, working with global leaders to help address key industry and societal issues.

These are the 5 nominees for the SwedenBIO Award

SwedenBIO awards this prize annually to a life science company that has excelled during the year and has contributed to societal benefits that underline the importance of a successful life science industry in Sweden. This year’s nominations for the SwedenBIO Award show the diversity that exists in Swedish life science.…

Evelina Vågesjö included in a 2021 Power List in Advanced therapies

The CEO of Ilya Pharma, Evelina Vågesjö, is listed for Advanced therapies by the The Medicine Maker. She is on the list together with the former Head of Cell- and Gene therapies at Novartis bringing the first CAR T cell therapy to market and the recent Nobel Laureates and users…

The winner of the SwedenBIO Award 2019

Biotage has received this year’s SwedenBIO Award for its commitment and contributions to the Swedish life science industry. Each year SwedenBIO, the national non-profit association for the life science industry in Sweden, highlights a company that has stood out when it comes to R&D, business development and growth, but also…

At the Monte-Carlo event the jury presented the winners, two talented entrepreneurs who will help create  impact in the prevention and treatment of cancer. The Lyfebulb-Helsinn Innovation Award in Oncology went to Mihir Shah, CEO and Founder of UE LifeSciences, who will use his winnings to help spread affordable, accessible…