For Nobel Prize Winner Paul Modrich science is about using inner creativity and seeing an idea transform step by step into new exciting discoveries. A curiosity and love for problem-solving research that has given us groundbreaking knowledge about human DNA.

The camera flashes were the only thing that was heard for the first minutes as Paul Modrich, together with the other Nobel Prize Laureates, entered the stage in front of the international press. Journalists and photographers had been invited to a press conference with the Nobel Prize winners in Chemistry, Physics and Economic Sciences at the Royal Academy of Sciences in Stockholm, starting off the festivities of the intensive Nobel week. Nowadays the Laureates are as equally sought-after as any rock star and the schedule is loaded with interviews, lectures and of course the award ceremony and subsequent Nobel Banquet. We got a few minutes after the press conference for some questions and a photo shoot with the now world-famous Howard Hughes Medical Institute Investigator and Duke Medical School Professor.

When Modrich and his wife Vickers Burdett, also a Duke biochemist, got the life-changing call about the Nobel Prize at the beginning of October they were on vacation in New Hampshire. In shock, but still in the calm before the storm. Since then, “It has been nonstop,” Modrich says, as we sit down in one of the ornate halls. The media attention appears to a bit overwhelming for the 69-year-old biochemist, who has been described as somewhat modest. Being appointed as one of the winners of the Nobel Prize in Chemistry has been an overwhelming experience.

“It has really changed our lives – in a good way,” he says. “It’s also gratifying to know that your colleagues appreciate your work. You can never know that. In science, it’s other people that determine the value of your work.”

Modrich shares this year’s Nobel Prize in Chemistry for his studies on how mistakes in the DNA code are repaired. He started out investigating the question of DNA repair in the late 1970s and his key contribution has been to identify and characterize the proteins in the mismatch repair (MMR) system, showing how the system functions as a copyeditor to correct the rare errors left by DNA polymerase. His findings have given us invaluable knowledge to better understand what keeps our DNA intact. Also, as he concludes, looking back on his years of research, this has played an important role in comprehending the emergence of certain types of cancer. Modrich and his colleagues have shown that inactivation of the mismatch repair system is the cause of the most common form of hereditary colon cancer, and “This pathway also has indications for certain neurodegenerative diseases,” he says.

The work of dissecting the molecular mechanisms of MMR in humans continues and Modrich is also exploring the role of MMR in how certain cancers become resistant to chemotherapy, as well as the involvement of the MMR system in causing, for example, Huntington’s disease. More important hours are being spent at the lab, in other words, the part of the job that he also enjoys the most.

“I personally love doing experiments. I really like doing the everyday work at the lab,”  Modrich states.

Modrich grew up in a small town in New Mexico. The mesmerizing natural surroundings, with great biological diversity, captured his attention and gave him a love for the natural world, and a fascination for how much the ecology could change just within a few miles. This interest was further encouraged by his father, a high school biology teacher who gave him some life-changing advice when Modrich was in Junior Highschool. “You should learn about this DNA stuff,” he said, and listening to his father’s counsel turned out to be a clever choice. Today some 50 years and groundbreaking discoveries – and a Nobel Prize – later, he finds this DNA stuff to be “really interesting”. He says and smiles, “I think my father would have been very pleased.”

Talking about the new generations of scientists starting off on their journey, dreaming about exciting – possibly groundbreaking – discoveries in the lab, Modrich states that a career in science definitely does involve some hard work, but above all the most important drive for scientists lies in their creativity.

“My daughter is an artist and I think that there are many parallels between art and science. Artists take an idea essentially from nothing and turn it into an object. Scientists take an idea and try to generate new knowledge that will be useful to society. Both are essentially starting with something that is only in their own mind. Hard work is important but there has to be creativity, it’s the ideas that are the necessity to really go forward,” explains Paul Modrich.

His own driving force and passion for the everyday work revolves around the problem-solving aspects of research, gradually getting one step closer to new findings.

“To me it’s about the little gratifications from good results, the small steps in which science moves,” he states. 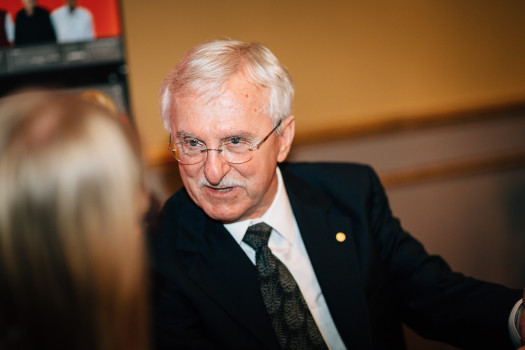 Ensuring the Institute for Molecular Medicine Finland (FIMM) continues to lead at home in the molecular medicine field and grows in international prominence are among the goals of FIMM’s new director Dr. Jaakko Kaprio. “Molecular medicine is evolving rapidly and we need an institute in Finland that is at the…

Despite earning multiple degrees in physics and all his years doing research, Nobel Prize winner Dr. Eric Betzig sees himself foremost as…a tool builder. “One of the greatest things about being a tool builder, which I consider myself, is you get to learn things from the best,” said Betzig of…

Professor Campbell has always been fascinated by parasites, he even paints their mouthparts as if they were flowers in a vase. He has also spent most of his life figuring out how to kill them, and improving health and wellbeing of millions of individuals. Tiny and stealthy, roundworm parasites often…