Researchers at Karolinska Institutet have developed the first method for directly measuring the extent to which drugs reach their targets in the cell.

As described in the scientific journal Science, the method could make a significant contribution to the development of new, improved drug substances. Previously, no method has been available for directly measuring the efficiency of the drug molecules to locate and bind to its target protein. In some cases, where drug candidates have not lived up to expectations in clinical trials on humans, it has transpired that the drug molecules have failed to bind to the right protein.

However, researchers from Karolinska Institutet have now developed a new tool called CETSA (Cellular Thermal Shift Assay). The tool utilizes the concept that target proteins usually get stabilized when drug molecules bind. According to lead investigator Professor Pär Nordlund of the Department of Medical Biochemistry and Biophysics, method works on a wide variety of target proteins… “it allows us to directly measure whether the drug molecules reach their targets in cells and animal models.”

The method could provide an important diagnostic tool in the treatment of cancer, for example, as CETSA can, in principle, enable the researchers to determine which drug is most effective at targeting the proteins in the tumour. 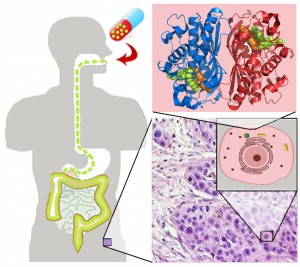 The path of a drug from pill to drug target. Credit: Daniel Martinez Molina

According to Nordlund, CETSA will eventually help to improve the efficiency of many drugs and contribute to better drug molecules and more successful treatments. The group behind the study believes that CETSA will be an important control stage and a complement to other methods.

The evaluation of CETSA has been conducted in collaboration with Yihai Cao’s research group at the Department of Microbiology,Tumor and Cell Biology at Karolinska Institutet, Pelago Bioscience AB and Nanyang Technological University in Singapore. Professor Pär Nordlund and Dr Daniel Martinez Molina are two of the founders of the company, which was also involved in the study.