Ed Boyden, Y Eva Tan Professor in Neurotechnology at the MIT Media Lab and McGovern Institute, and leader of the Synthetic Neurobiology Group, led the team that developed a new microscopy technique called expansion microscopy. With this technique his group, including then-graduate students Fei Chen and Paul Tillberg, made it possible to record images of biological preparations that were previously very difficult to study. The technique is based on  physical expansion of the biological specimen, which also makes it transparent. By expansion, magnification is obtained even before the microscope is used.

Images of the brain’s three-dimensional structure

Ed Boyden has with expansion microscopy, much like Lennart Nilsson, made the invisible visible and, with an artistic view, highlighted the beauty in microscopy preparations, in particular images of the brain’s three-dimensional structure. His microscope images have, through their detail and beauty, provided a deeper understanding of the complexity of the brain for both laymen and experts. 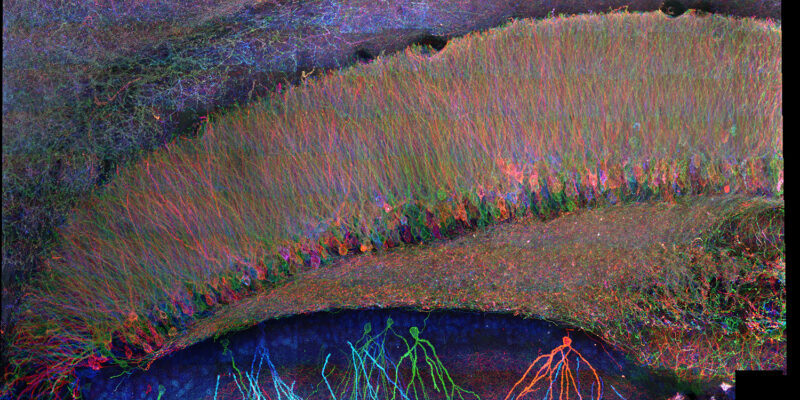 A rendering of part of a large scale, 3-D, multicolor image of a piece of the mouse hippocampus. Neurons express differently colored fluorescent proteins through a technology called Brainbow, in which viruses deliver the genes that encode for different fluorescent proteins to different neurons. This brain was prepared using expansion microscopy. Photographer: Ed Boyden

Motivation from the jury

Ed Boyden is awarded the prize for his development of expansion microscopy; a microscopy technique that makes the invisible visible and brings out the hidden details in microscopy preparations, beautifully demonstrated by studies of three-dimensional structures in the brain.

The Nobel Assembly at Karolinska Institutet has decided to award the 2020 Nobel Prize in Physiology or Medicine jointly to Harvey J. Alter, Michael Houghton and Charles M. Rice, for the discovery of Hepatitis C virus. The three scientists have made a decisive contribution to the fight against blood-borne hepatitis,…

L’Oréal, UNESCO and collaborators have chosen to turn the spotlight on female researchers and encourage more young women to enter this profession. Nordic Life Science has chosen to highlight two 2019 life science winners from our region, Aishe A. Sarshad and Laura Elo. Since 1998 the L’Oréal-UNESCO For Women in Science International…

She receives the 2021 Marie and August Krogh Prize for her dedicated efforts in cancer and immunotherapy. The Prize is awarded annually to an outstanding health researcher in Denmark. The Foundation and the Organization of Danish Medical Societies award the Prize, which is accompanied by DKK 1.5 million, of which…