According to Professor Tomas Lindahl successful scientists have a lot in common with successful musicians. It takes dedication and many hours of practicing. His passion and hard work led him to a completely new research field – and a Nobel Prize.

“I like to compare research to artistic activities. Great musicians do not complain when they have to practice. They feel lucky to be able to get paid doing their hobby, and they want to become as good as they possibly can. That is how I feel about my research,” explains Lindahl when we meet on a mild and dark December afternoon in a beautiful Christmas decorated Grand Hotel. Two days later he received the 2015 Nobel Prize in Chemistry from the hands of his majesty the King of Sweden.

The importance of mentors

In his speech at the Nobel Banquet Lindahl emphasized the crucial importance of early mentors and teachers. He grew up in a green suburb of Stockholm, Bromma, and was fortunate to have excellent teachers in chemistry, biology, mathematics and literature. His father was a business man and his mother was interested in languages and translations. When the family moved to central Stockholm the teachers at the new school did not like him and he did not like them, and one of them even failed Lindahl in chemistry.

“This was serious because I needed good marks to be able to enter the Karolinska Medical School in Stockholm at a later stage. Thanks to the concern and help of my parents, I was fortunately able to return to my previous school and the excellent teachers there who supported me. In particular, I had inspiring help from an outstanding chemistry teacher. Her name was Karin Brandt. Mrs. Brandt encouraged my interest in chemistry,” said Lindahl in his speech.

Lindahl entered the Karolinska Medical School in Stockholm and found himself to be more fascinated by medical chemistry and spending time in the laboratory, so he realized that he might not become a very good doctor. Again he emphasizes the importance of a good mentor. As a graduate student he was supervised by the legendary DNA chemist Einar Hammarsten. Hammarsten was the first scientist to show in his early work that DNA is a very large molecule, a macromolecule. He was also known for his temperament and his complete dedication to his research.

“Hammarsten was very fascinating and he had an enormous charm. He was completely absorbed by research,” says Lindahl.

How stable is DNA really?

Together with his former supervisor Lindahl also shares a love for basic research. At the end of the 1960s Lindahl started investigating how stable DNA really is. At this time, the general belief was that the DNA molecule was extremely resilient. Evolution requires mutations, but only a limited number per generation.

“We did several interesting projects together. Is the literature accurate with what we observe in the lab?” says Lindahl. “First you have to convince yourself, then others, and you build your observations on reliable experimental data, which is really exciting. Nature is smarter than we think. It is trying to tell us something, and this has a meaning.”

After finishing his thesis in 1967, Lindahl went to the US for further research. He was a postdoc at Rockefeller University where he worked mainly on the RNA molecule. It was well known that RNA was more unstable than DNA, but he started to wonder if RNA was destroyed so quickly when subjected to heat, could DNA molecules really be stable for a lifetime.

“My time in the US was very educational but the tempo was faster than in Sweden, which might not always be a good thing, as there is a little less time to reflect,” recalls Lindahl.

A new field of research

Lindahl returned to the Karolinska Institute and Stockholm when the Swedish Research Council offered him a position as researcher. As a council scientist he was given fairly free hands to perform research and he set up a small research lab.

“I think the freedom that I was given and the time I had in the lab made it possible to make the discoveries that I made. Today young researchers have to write grant applications every week and the competition is so high. You can’t expect results directly, you have to trust the scientist and give them somewhat free hands to perform good science. Then the discoveries will follow,” says Lindahl.

And this is what happened in his case. Together with his laboratory assistant Barbro Burt (formerly Nyberg) he made several crucial and important experiments that showed how DNA underwent a slow but noticeable decay. He estimated that there were thousands of potentially devastating injuries to the genome every day and this frequency was clearly incompatible with human existence on Earth. There must be molecular systems for repairing all these DNA defects. Lindahl started looking for repair enzymes, using bacterial DNA, which just like human DNA consists of nucleotides with the bases adenine, guanine, cytosine and thymine. He showed that the nitrogen base cytosine in DNA easily loses an amino group to become the base uracil. If the flaw remains, a mutation will appear the next time DNA replicates. Lindahl concluded that cells must be able to counteract such damage. In a study published in 1974 he identified the enzyme uracil-DNA glycosylase in E. coli, which finds and removes the faulty uracil base. He outlined the fundamental concept for the base excision repair mechanism, and these experiments laid the foundation for a completely new kind of research field.

“It was thrilling,” he says. “I did not realize the full potential of these findings at that time, but I was excited and perhaps luckily, I was a young and arrogant scientist who continued on despite the general belief,” says Lindahl and laughs.

An opportunity he could not resist

Obliged as a council scientist, in 1978 Lindahl applied for a professor position in medical and physiological chemistry at the University of Gothenburg. But a new relationship and an opportunity he could not resist made him move to England after only a few years in Gothenburg. He was asked to become the new Director of Clare Hall Laboratory, the former Imperial Cancer Research Fund. Clare Hall lies in a suburb of London, close to St Albans, and Lindahl describes the surroundings as green and pleasant.

“As Director I tried to make the atmosphere personal and pleasant. I believe scientists work better if they are in a good mood. Many of the scientists I recruited have become personal friends of mine.”

Here he was able, step by step, to put together the molecular image of how base excision repair functions. This is a process in which glycosylases, enzymes similar to the one Lindahl found in 1974, are the first step in the DNA repair process. He was able to show that base excision repair also occurs in humans and in 1996 he was able to recreate the human repair process in vitro.

“The time was ripe for these results, it was very exciting,” says Lindahl, who since then, together with his colleagues, has found and examined many of the proteins in the cell’s toolbox for DNA repair.

Lindahl’s and his fellow Laureate’s findings have led to a better understanding of how the living cell functions, as well as providing knowledge about the molecular causes of several hereditary diseases and about mechanisms behind both cancer development and aging.

For example, in many forms of cancer, one or more of the repair systems discovered by the Laureates have been entirely or partially switched off. This makes the cancer cells’ DNA unstable, which is one reason why cancer cells often mutate and become resistant to chemotherapy. At the same time, these sick cells are even more dependent on the repair systems that are still functioning, as without these their DNA will become too damaged and the cells will die. Researchers are attempting to utilize this weakness in the development of new cancer drugs. Inhibiting a remaining repair system allows them to slow down or completely stop the growth of the cancer.

“Hopefully in the future we may repress the cancer and hence, convert these diseases into something we can live with,” says Lindahl.

Reading and hearing about Lindahl, as well as listening to him, it is hard not to notice his generosity and his true passion for science. One of Professor Lindahl’s former doctoral students, Stefan Söderhäll, now a pediatric oncologist and researcher at KI’s Department of Women’s and Children’s Health, described how generous Lindahl is as a researcher to Sara Nilsson at the Karolinska Institute.

“One of my thesis papers was accepted in the highly reputed periodical Nature. Tomas could have demanded to be included on the list of authors since he was my supervisor and had naturally given me a great deal of advice. But thanks to him I was named as the sole author. The kind of generosity Tomas showed in doing that is rare, both then and now. I was overjoyed when I heard he’d been awarded a Nobel Prize. Not just because I know him, but because he’s made an impact without being academically pushy, without trying to ruthlessly secure resources at someone else’s expense and by more or less fair means. It pleases me that sheer competence is enough.”

Persistent and curious are key characteristics of a good scientist according to Lindahl.

“The most rewarding and fun part of being a scientist is receiving results that you did not expect, when nature tells you how important this is, and you come to conclusions by performing experiments,” he says. “I am a little worried that young researchers today spend more time in front of their computers than they spend in their laboratories. A great discovery usually comes from experiments, there are few geniuses that sit by a desk and figure out what they are going to discover. Nature is more complex than we think it is. Researchers need time to explore their field and really absorb their research. To find new and unique things you need time to handle and reflect and have a good intuition, you can’t force that.” 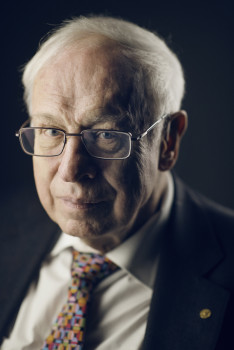 Professor John O’Keefe discovered the brain region responsible for mapping and navigating the environment. And his explorations continue… Terrific, delighted, and grateful were among the joyful words from Professor John O’Keefe upon hearing that he would be awarded the 2014 Nobel Prize in Physiology or Medicine. O’Keefe, who is at…

Japanese Professor Satoshi Ōmura is widely recognized for his discovery, development, biosynthesis and manipulation of useful chemicals derived from naturally-occurring microorganisms. It is also for this valuable work – described by him as “a splendid gift from earth” – that he was awarded a Nobel Prize in Physiology or Medicine…

Massachusetts Institute of Technology (MIT) in the US has produced more than its share of engineers and computer scientists, but unlike many of his peers, alumnus Dr. Robert Langer, ScD, turned his chemical engineering skills to medicine, becoming one of the world’s leaders in perfecting effective drug delivery systems. Robert…