Why science is vibrant in Trondheim

With a long history in science and education, strong corporate links and cross-disciplinary projects, Trondheim has made an important mark on both the national and the international life science map.

Science and learning has a long and proud tradition in Trondheim. Trondhiemske Selskab, Trondheim Academy, was founded in 1760 as Norway’s first academic society and the library, founded in 1768, is Norway’s oldest, according to Pernille Feilberg, communications advisor at the faculty of natural sciences at the Norwegian University of Science and Technology (NTNU). ”Biology and natural history were among the main research interests of the academy and the traces of the Trondheim Academy are still alive and visible here,” she says.

NTNU today has the main responsibility for higher education in technology and it is the Norway’s premier institution for the education of engineers. In January 2016 the university merged with the three university colleges of Gjøvik, Ålesund and Sør-Trøndelag, becoming the country’s largest university. It has 120 laboratories and more than approximately 4 000 scientific staff. 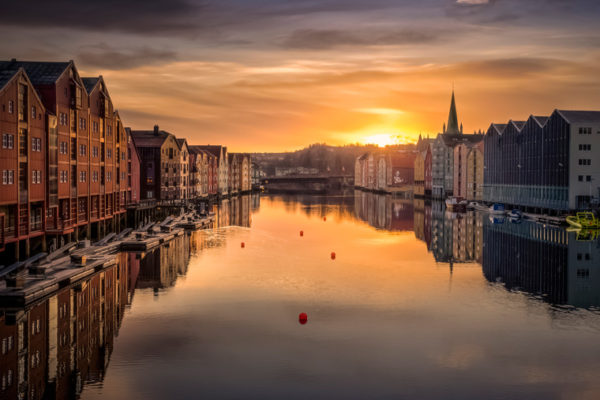 Out of a total population of 190 000 more than 33 000 are university students and Trondheim is regularly rated as the best student town in Norway.

“It is a city of students, sciences, technology and culture. The students leave their mark on the city and contribute to a high level of innovation and culture,” says Feilberg.

Trondheim is also the major city in the region of Trøndelag, where part of the population is participating in a major health study.

The Nord-Trøndelag Health Study (The HUNT Study) is one of the largest health studies ever performed. It is a unique database of questionnaire data, clinical measurements and samples from a county’s inhabitants from 1984 onwards. The HUNT Study is well-known in the county of Nord-Trøndelag, and its inhabitants have a generally positive attitude to participation and health research resulting from the study. HUNT has high participation rates, providing a good base for further health surveys in the county and an excellent research environment.Today, HUNT Research Centre has a database with information on almost 120,000 people. Approximately 300 national and international research projects are currently using the samples and data from HUNTs collection. As of 2017, HUNT4 is gathering new data and samples throughout the county to develop The HUNT Study further.

Another unique feature of Trondheim is the strong link between research and industry, says Freiberg. NTNU has close collaborations with industry, and particularly with its R&D partner SINTEF, Scandinavia’s largest independent research organization. The collaboration with SINTEF started already in 1950 when SINTEF was founded by NTH, the Norwegian Institute of Technology (a predecessor to today’s NTNU).

”According to the Times Higher Education World University Rankings (March 2017), NTNU is ranked 1st in the world ranking of universities with the biggest corporate links, due to the collaboration with SINTEF,” says Feilberg. 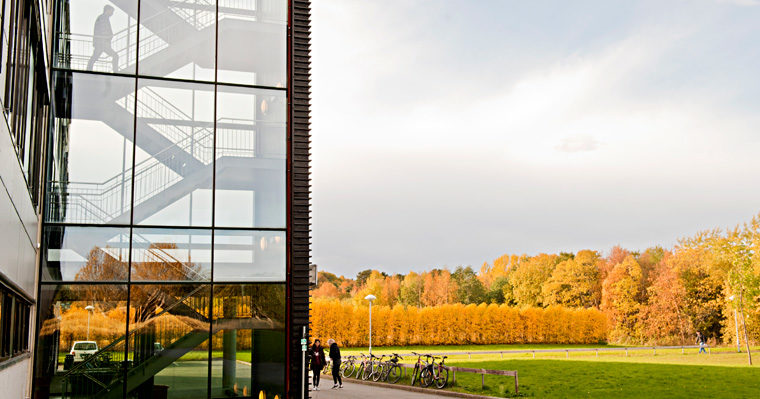 Among the areas where the two cooperate is biotechnology, a strong area for Trondheim. The design of the NTNU’s biotechnology program reflects the conviction that extensive transdisciplinary interaction between life sciences, mathematical sciences and engineering is the key to transformative 21st century biotechnology. It is developed in close conjunction with SINTEF and St. Olavs hospital (Trondheim University Hospital), which is tightly integrated with the Faculty of Medicine and Health Sciences.

”In many ways new research and innovation initiatives today seem more similar to the ways of approaching knowledge acquisition in the days of the Trondheim Academy, compared to the last 100 years. In the early days of science there were few boundaries between the research disciplines,” says Feilberg. ”Today we see new ideas and fields of research result from the confluence of several research disciplines.”

NTNU is also the leading institution of the Norwegian Centre for Digital Life, funded by the Research Council of Norway. The virtual center’s main mission is to become the major vehicle for reorienting and concentrating Norwegian R&D on biotechnology in the years to come. Among research projects led from NTNU are 3D Life, which works on simulated and experimental 3D tissue models, Double Intraperitoneal Artificial Pancreas, working on making an artificial pancreas for continuous monitoring and regulation of blood sugar in diabetes patients and Lab-on-a-chip, working on making accurate, inexpensive and quick diagnostic tool for liquid patient samples. 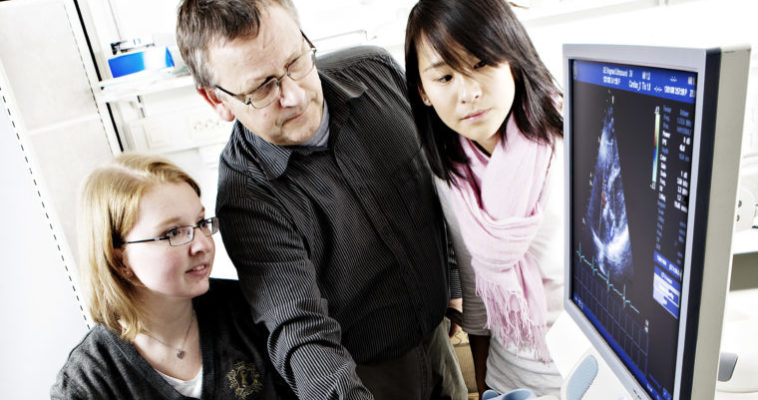 Among the university’s four strategic research areas 2014–2023 is Health, directed by Researcher Magnus Steigedal. Research areas include diagnostics and therapy, health promotion, prevention and empowerment, and ICT systems, welfare technology and organization of health services. For example, the project Model based, noninvasive diagnosis of coronary artery disease with 3D ultrasound and CT aims to develop a new diagnosis technique that can be performed at every local hospital without using catheter.

NTNU also hosts several centers of excellence and centers for research based innovation. For example, CEMIR, the Centre for Molecular Inflammation Research, identifies new therapeutic targets and develops new diagnostic tools for inflammatory diseases through an integrated 10-year program of research and research training in molecular innate immune responses. CNC, the Centre for Neural Computation, has the goal to advance our understanding of neural circuits and systems and their role in generating psychological functions.

A strong area of research in Trondheim is neuroscience, much thanks to May-Britt and Edvard Moser’s research group at the Kavli Institute for Systems Neuroscience. The Moser’s research led to Norway’s first ever Nobel Prize in Medicine in 2014, for work on what is being called the brain’s inner GPS, or global positioning system. The overall mission is to understand the emergence of brain functions in any system in any species. And their research is continuously making new discoveries. Last year Christian Doeller at the Kavli Institute was awarded the Radboud Science Award for his research on how the brain links memories of different events to form one coherent memory. Doeller and his lab is now hard at work discovering the neural building blocks of human cognition and taking the first steps toward unravelling Alzheimer’s disease.

According to Feilberg the Nobel Prize has definitely put NTNU and Trondheim on the international map, and not just for scientists.

”Trondheim was chosen as a venue for the international research and music festival Starmus 2017 in June, and Edvard and May-Britt Moser were instrumental in the process. The festival gathered 11 Nobel laureates, 10 astronauts, three of whom have walked on the moon, rock stars of music and rock stars of science in Trondheim. The festival had an extensive program for the entire population of Trondheim, with exhibitions, lectures, concerts and entertainment for people of all ages,” she says. 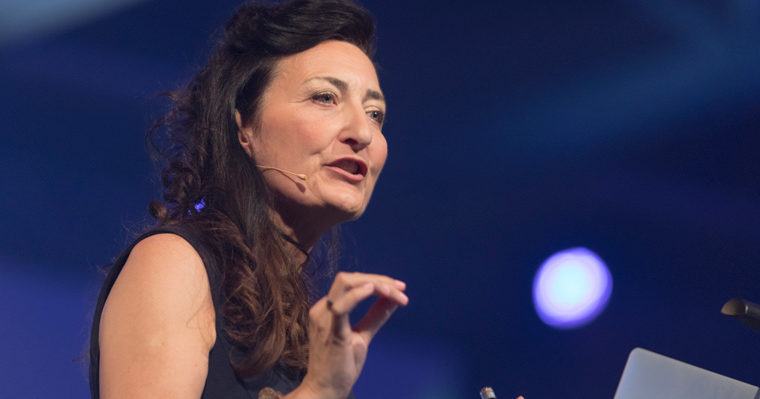 Vectron Biosolutions
The company was founded in 2008 as a result of research in Professor Svein Valla’s research group at the Department of Biotechnology at NTNU. Professor Valla was a world-leading expert on gene expression in bacteria and vector technology. His research has resulted in a novel technology platform for production of recombinant proteins that can be used for higher protein production levels at lower costs and increased solubility. This technology comprises Vectron’s core technology. The company focuses on developing broad-host-range vector technology, especially expression vectors for industrial level production of recombinant proteins.

Biosergen
The company was established in 2004 to exploit inventions made at SINTEF and NTNU. The company’s laboratory is located in the modern Natural Sciences Building on the campus of the NTNU. Key employees have experience in researching antibiotic-producing bacteria, track records in the genetic manipulation of bacteria, and broad knowledge in drug development. The current major owners of the company are Karolinska Development AB, Östersjöstiftelsen, and Sintef Venture II.

Avexxin
This pharmaceutical company creates therapeutics by providing disease-modifying drugs to address inflammatory disorders and cancers that are not adequately treated with existing therapies. All of Avexxin’s small molecules are nanomolar potent drug candidates targeting chronic inflammatory disorders and cancers with high unmet need. The company has expertise in understanding the role of an intracellular target downstream of the classical therapeutic intervention of the pro-inflammatory cascade activated by NFkB. Its molecules inhibit the group IVA cPLA2 enzyme, however still allowing the cell to function at the physiological level.

CrayoNano
CrayoNano has developed a technology based on a method of growing nanowires on graphene. Nanowires on graphene enable critically improved internal quantum efficiency, operating lifetime, and reliability, especially for deep UV. The result is UV LEDs with 10 times higher efficiency at less than 10% of the cost of existing deep UV LEDs. This improvement will enable new applications and improve critical applications, such as water and food processing disinfection, air purification and environmental monitoring and life science measurements.

FEI
The company, which is now part of Thermo Fisher Scientific, designs, manufactures, and supports the broadest range of high-performance microscopy workflows that provide images and answers in the micro-, nano-, and picometer scales. The company combines hardware and software expertise in electron, ion, and light microscopy with deep application knowledge in the materials science, life sciences, electronics, and natural resources markets.

Recipharm is entering into a collaboration with Laccure AB for the commercial manufacture and delivery of Laccure Pessary. The new product, which has been developed to help women suffering from bacterial vaginosis, will be manufactured, packaged and distributed globally from Recipharm’s facility in Karlskoga that specialises in the production of…

Elekta has entered into a collaborative agreement with IBA to optimize quality assurance (QA) solutions. Radiation therapy departments and clinics using Elekta’s treatment delivery systems will benefit from QA solutions that are designed for these devices by streamlining workflows and improving access to measurement data, states Elekta “With this agreement,…