Swedish scientist Gabriella Lundkvist explains how the cellular mechanisms of the circadian clock may be altered in psychiatric disease and how she has been able to watch the molecular clock “live”.

Three American scientists won the Nobel Prize in Physiology or Medicine 2017 for their discoveries on the molecular mechanisms controlling circadian rhythms. Jeffrey C Hall, Michael Rosbash and Michael W Young were recognized by the Nobel committee for their research explaining how plants and humans adapt their biological rhythm so that it is synchronized with the Earth’s revolutions.

Using fruit flies as a model organism, the Laureates were able to isolate a gene, called the period gene, which controls the normal daily biological rhythm, and show that this gene encodes a protein (PER) that accumulates in the cell during the night, and then degrades during the day. They also identified additional protein components of the machinery, exposing the mechanism governing the self-sustaining clockwork inside the cell.

“When there is a mismatch between this internal clock and the external surroundings it can affect the organism’s wellbeing, for example when we experience jet lag. But there are also indications that chronic misalignment between our lifestyle and the rhythm dictated by our inner timekeeper is associated with increased risk for various diseases.”

The inner clock regulates critical functions like behavior, hormone levels, sleep, body temperature and metabolism. When there is a mismatch between this internal clock and the external surroundings it can affect the organism’s wellbeing, for example when we experience jet lag. But there are also indications that chronic misalignment between our lifestyle and the rhythm dictated by our inner timekeeper is associated with increased risk for various diseases. For example, disturbed rhythms are common in certain psychiatric disorders, neurodegenerative diseases and aging.

The importance of chronopharmacology

Gabriella Lundkvist, a Swedish neuroscientist who is a specialist in circadian biology (chronobiology *), emphasizes the importance of this field of research, and in particular chronopharmacology, i.e. that pharmaceuticals and other substances may have completely different effects during the 24 hour clock.

“A substance may also be less toxic during certain hours of the day compared to other hours, for example when it comes to certain forms of chemotherapy. Importantly, a substance may have a good effect at certain time points during the day but not at other times. This is explained by the fact that the molecular clock controls the functions of our cells, for example receptiveness for ligands/substances via circadian rhythm in up- or downregulation of receptors,” she explains.

Lundkvist believes that both research institutions and pharma companies have an important task to invest resources in this important research field, “Finding out what different effects existing pharmaceuticals/substances have during the course of the day is very important.”

“A strict circadian rhythm is important for sleep quality, performance, repair mechanisms and well-being for instance in elderly, and can even improve the outcome of clinical treatment regimes.”

Lundkvist adds that it is also important to implement circadian rhythm stabilization in hospitals, retirement homes and schools. “For example rhythm stabilization could be obtained with strictly regulated light/dark cycles using daylight lamps and light proof window curtains. A strict circadian rhythm is important for sleep quality, performance, repair mechanisms and well-being for instance in elderly, and can even improve the outcome of clinical treatment regimes. Conversely, a disrupted rhythm can for instance trigger manic episodes in bipolar disorder. Long-term rhythmic disruption during shift work can lead to severe diseases such as diabetes, depression and cancer.” 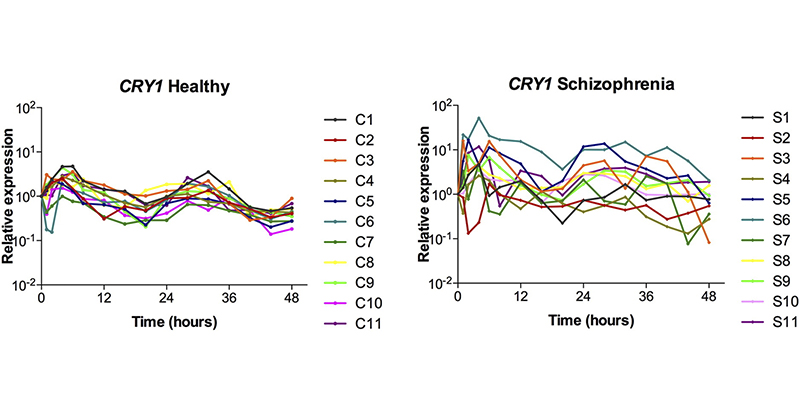 Relative expression of examples of a ”clock gene” (Cry1) in skin cells from 11 healthy control subjects (C1-11) and 11 patients with chronic schizophrenia (S1-11). Patients with schizophrenia lack a normal circadian rhythm in Cry1 (while Reverb-alpha, another clock gene, not shown here) is expressed normal. This indicates a disturbance in the molecular clock, which may lead to a pathological sleeping cycle and altered circadian rhythms.

Lundkvist is currently located at the Max Planck Institute for Biology of Ageing in Cologne, Germany, where she works as the Institute Scientific Coordinator. She is also affiliated as Associate Professor at Karolinska Institutet in Stockholm.

In her research, Lundkvist is particularly interested in if the molecular clock is disrupted in psychiatric disease. Together with colleagues at Huddinge hospital, she studies foremost schizofrena and bipolar disease, which are characterized by, among other things, sleep and rhythm dysfunctions. “We have observed changes in the expression of the circadian rhythm in the form of so called “clock” genes,” says Lundkvist.

“The difference was not very big – about half an hour – but this has a big impact. If your body thinks the day is half an hour longer this will result in very big changes after a week in constant conditions.”

Clock genes can be found in most cells in the body, so for example cells from skin biopsies can be cultured and the expression of molecular rhythms studied. And even seemingly small changes to the molecular clock can have big effect on human behavior. For example, a recent study showed differences in the period (the time to complete a cycle, effectively a day) of molecular clock cells between the skin of people who prefer mornings and those who prefer evenings.

“The difference was not very big – about half an hour – but this has a big impact. If your body thinks the day is half an hour longer this will result in very big changes after a week in constant conditions,” commented Lundkvist when interviewed by Projects Magazine.

She means that research into the cellular mechanisms of the circadian clock, as well as hormonal rhythms in the blood, holds the key to a deeper understanding of such issues. 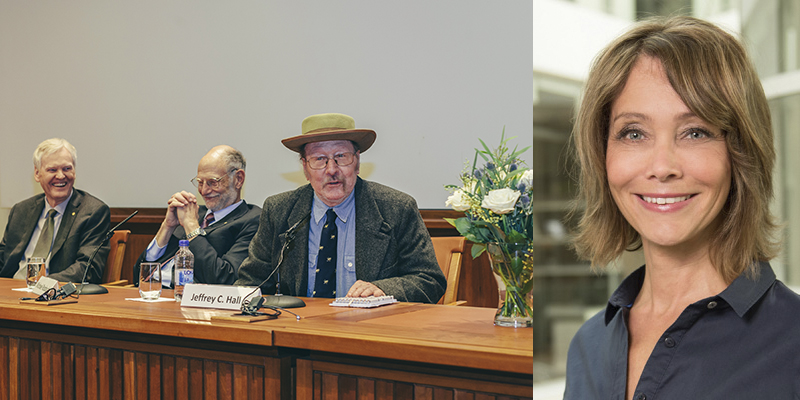 Gabriella is also an alumna of the University of Virginia in Charlottesville, where she previously worked as postdoctoral fellow in Gene Block’s laboratory at the Center for Biology of Timing. In the US, she learned a technique to display the molecular clock “live”, which she brought back to Sweden. The technique is based on visualizing the activity of clock genes or clock proteins in transgenic mice (Yoo et al PNAS 2004; Yamazaki et al 2001) with a light marker that emits photons (light quanta). These photons may be detected with sensitive cameras in cultured living tissue from the transgenic mice.

“The more photons, the stronger light signal, the more proteins/gene transcript. The light marker in this case is the firefly enzyme luciferase, which creates a light reaction when the substrate, luciferin, is added. By measuring how strong the light signal is you know if the protein/the gene is activated or is decreasing, respectively,” explains Lundkvist.

* Chronobiology: a research field that described how daily fluctuations in sleep-wakefulness, social behavior, hormonal release, immune system mechanisms and other bodily functions are controlled by a “body clock”.

The secretary general of the Nobel Assembly resign

The Paolo Macchiarini scandal at the Karolinska Institutet has prompted Urban Lendahl, secretary general of the Nobel Assembly, to resign. Lendahl, a developmental geneticist at KI, was involved in hiring Macchiarini in 2010. A statement from the Nobel Committee yesterday said that Lendahl expected to be involved in the investigation and was…

The Nobel Prize in Physiology or Medicine 2015

The lucky winners of this year’s Nobel prize in Physiology or Medicine are William C Campbell, Satoshi Omura and Youyou Tu. William C Campbell and  Satoshi Omura receives the Prize for their discoveries concerning a novel therapy against infections caused by roundworm parasites, and Youyou Tu receives the Prize for her discoveries…

On Tuesday December 8th, after his Nobel Lecture, Nordic Life Science met the Nobel Laureate in Chemistry, Professor Tomas Lindahl, for an interview at the Grand Hotel. Professor Lindahl shared his thoughts about basic research, what fascinates him about science and chemistry and his hopes for the medical applications of…

Stefan W. Hell, PhD, likes to get down to the fundamentals. As an undergraduate, he disliked hearing professors say, “If you do the maths, you’ll know why this is so.” He was convinced everything could be reduced to the simplest principles and spent hours, as he put it in his…